"Striving for Imperfection" An Exhibition by Christopher Newberry 3rd-28th April

“Striving for Imperfection”  or  “Quasi-Reality in a Post-Truth World” 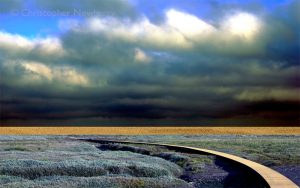 We are now living in a period where too many falsehoods are used in politics and in the media meant to confuse and obfuscate.  Many perceive these falsehoods as ‘true’. The time we live in now is the ‘post-truth era’.  Facts are not the main component in forming opinions. Today, opinions and decisions rely more on ‘gut feelings’. Populist ideologies have exploited this. Populism provides easy answers to complicated questions, answers 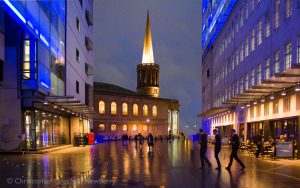 that people want to hear, rather than truthful ones.  People on the whole see what they want to see or what they think they should see –not what is there to be seen.
So what role can art have to bring back some sort of objectivity in forming opinion?
The images in this exhibition are not real.  They are not truthful.  They are intended to clarify that indeed, they are not truthful.  They are what we think we see.  The images are platonic views, idealised views.  They are a quasi-reality.  They are verisimilar – that is they look real, but aren’t. Scarily, any ‘factual’ message can be turned into a ‘verisimilar’ one.  Post-truth. 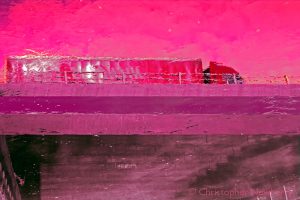 In this exhibition the original photos have been turned into verisimilar images. They are designed to invite the viewer to look closely and discover that although at first sight they appear ‘normal’, they are not in any sense ‘real’.  The viewer is also invited to spot how the image is not ‘truthful’.  At the same time they are interesting and aesthetically pleasing images, but without emotion.  Deadpan.  The images can then be interpreted in many ways, but not as ‘truth’.
It is important to distinguish between the factual and the verisimilar.
It is up to the beholder.
About the artist 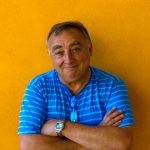 Christopher Cristóbal Newberry is an artist and writer born in Mexico City on a palindrome (15 11 51, which perhaps accounts for his fascination with symmetry).  His father was an American ‘country boy’ from Tennessee, while his mother is very much a Mexican city person.  He studied Communication Science at the Universidad Ibero Americana in Mexico.  He has lived in England since the first of the long hot summers in 1976. He has a spouse, two sons and a Border Collie.
With the advent of digital photography, he has come to regard himself, not as a photographer, but as an image creator – what he calls Image Inception.  That is, taking images from reality with the camera and transforming them into new, verisimilar images (that look real at first sight, but are not).
He is in particular, interested in the ‘post-truth’ world, where many messages are not meant to inform, but rather to confuse and obfuscate: Fake news, “alternative facts”, messages on big red campaign buses.  His images are deliberately transformed into ‘ideal’ versions of reality.  That is to say, the images are transformed to represent what people believe they see, rather than what is actually there.  He invites the viewer to become aware that his images are impossible – however much they resemble reality.
His work has been exhibited in Mexico City, London and Winchester.