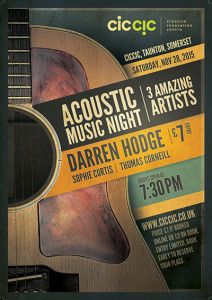 This amazing line-up of acoustic songwriters, guitarists and singers bring the whole spectrum of the acoustic music to life in Taunton on Saturday Nov 28th and an excellent price for hearing from 3 up coming and well-seasoned artists from a range of genres. We are very excited to have 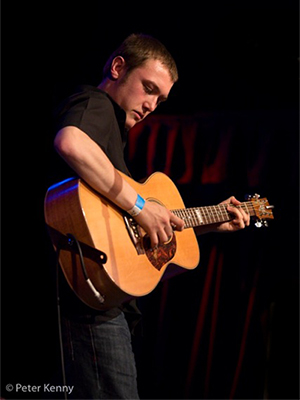 Darren James Hodge is a young man from Taunton, Somerset who is regarded by his peers as one of the top up and coming young guitarists in the country. After picking up his first guitar six years ago at the age of twelve Darren has been astounding audiences up and down the country with his ability and instrumental style of playing.
Darren has been very busy over the last couple of years and has already graced the stage withsome of the top guitarists in the world including Tommy Emmanuel, Clive Carroll, Ben Hughes all of whom are at the top of theirfield and have backed Darren as a future star. He is also an endorsee of the UK’S leading guitar company Tanglewood Guitars who had no hesitation in backing Darren once they heard him perform. All this has culminated in the completion of his first solo album “The Road To Nashville” which includes no less than seven pieces composed by Darren himself.
All in the industry who have heard Darren perform agree that this young man is a star of the future. In October 2013 he reached the final 10 of the BBC Radio 2 Young folk awards 2014 although he did not make the final 4 the experience was invaluable and he intends to apply again for 2015. At the start of 2014 Darren was signed to Jelli Records on a full Management/Recording contract which has opened up a whole new chapter in his career. With Bigger venues and is now supporting some of the top artists in the country. http://www.reverbnation.com/darrenhodge 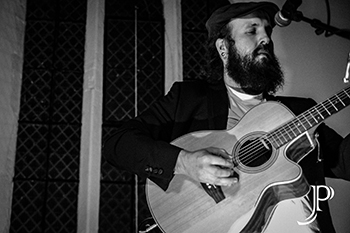 Ben F Goddard is the missing link, between the audience and the stage.
Having played around the country and settled back in Devon, his warmth, wit and relaxed style can make the largest room feel like a snug and the loudest heckle like the smallest child.
Getting ready to release his sophomore EP he is preparing to hit the road in earnest next year with his van Ivy and woodburner in tow.
With songs of beauty and lament for the world we find ourselves in, the only thing fit to do is laugh and cry. Ben certainly will. And you are welcome too. 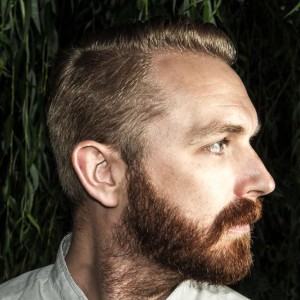