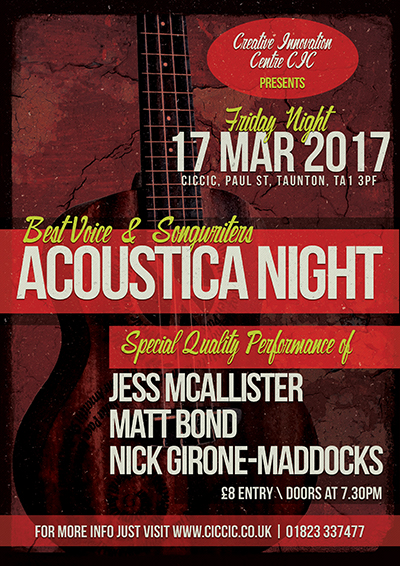 This amazing line-up of acoustic songwriters, guitarists and singers bring the whole spectrum of the acoustic music to life in Taunton on Friday 17th March and an excellent price for hearing from 3 well-seasoned artists from a range of genres especially chosen for their talent by CICCIC, director, Andrew Knutt. We are very excited to have 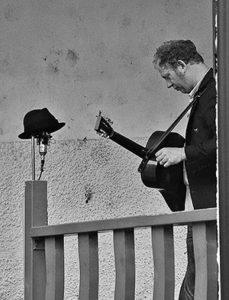 Armed with just an acoustic guitar or two, and a bunch of self-penned songs, Nick’s solo gig showcases the many characters and scenarios that have appeared on his numerous solo albums and his work with long-time bluegrass heroes Thunderbridge Bluegrass Band, of which he is a founding member.
With a ‘countryfied’ solo album planned for this year, this gig will be packed with old songs, new ones and some you may even recognize – encompassing many ‘roots’ styles such as blues, bluegrass and old time. Coupled with Nick’s humorous stories and anecdotes about his musical adventures, his solo show has always been a laid-back, good humoured and relaxed affair.

The music of Jess McAllister is wholesome, passionate and free-spirited. Developed naturally from the touchstones of modern folk, her songwriting has grown into an enchanting blend of sound, informed in equal measure by the spontaneity of live performance and an imaginative outlook on life.
Swirling with musical inspiration from a young age, Jess played the pub folk circuit in her home town Plymouth before performing and writing with a reggae band during her time at Exeter University. Leaving after three years she took a bold step forward, embracing two lifelong journeys which seemed destined to run in parallel: parenthood, and a solo music career.
Following the birth of her son, Alfred, Jess immersed herself in her songwriting with an enriched understanding of the human heart. Playing small, intimate gigs she added a tangible tenderness to her honey-dipped vocals and an uproarious fire to her foot-stomping acoustics, guiding captive audiences from raucous appreciation to spellbound silence.
For her E.P, songs grown from sensual piano composition and delicate vocal harmonies are woven with the gathered talents of her musical friends; Cello (Dury Loveridge), double bass (Damien Scarr), violin (John Matthias and Elizabeth Westcott), mandolin (Matt Norman) and drums (Tom Wright). 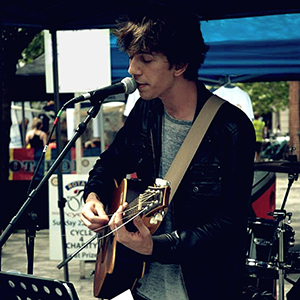 Indie Acoustic artist Matt Bond is a singer songwriter and multi-instrumentalist based in Taunton, UK. Drawing influences from popular fiction, his music pulls you headfirst into a cinematic and anarchic view of youth, love and life. Working at a local record store, a tea room, and writing and busking in his spare time, he gigged the London scene as one fifth of rock-act ‘Gallery of Thieves’, and more recently performed in Somerset as part of Folk/Acoustic act ‘Disguised As Diamonds’. Matt is currently performing acoustically and working on new material for the next album.
An amazing line-up for CICCIC Acoustica Night so be sure to book your tickets in advance.