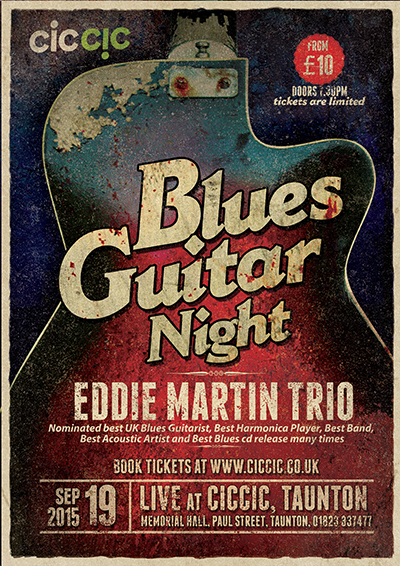 This amazing line-up of blues guitarist, musicians, songwriters and singers bring the whole spectrum of the blues guitar and blue music to life in Taunton on Saturday 19th Sept and an excellent price for hearing from one of the UK’s top well-seasoned bands/artists from the blues music genre.

With 12 rave-reviewed cd releases and constant globe-trotting since turning professional in 1995, London-born Martin has been called “The Ambassador of British Blues”. As adept on acoustic instruments as electric, and as a soloist or band leader, he ranks amongst the most succesfully versatile bluesmen in the world.
Nominated best UK Blues Guitarist, Best Harmonica Player, Best Band, Best Acoustic Artist and Best Blues cd release many times, his songs have made it onto TV and film soundtracks and to the song stable of Alligator Records. He has been broadcast live on international radio and tv with 3 sessions for BBC Radio 2, including at the famous Maida Vale Studios.
He is now touring internationally with Trio and Big Band to promote his new rave-reviewed cd “Looking Forward Looking Back” (“this album is special” Blues and Soul “Excellent” Blues News) featuring Pee Wee Ellis (ex James Brown) and the Little Big Horns (ex Mick Jagger), and as a one man band to promote his 11th cd release “Folk and Blues”, (“Superb” fROOTS, Brilliant” GUITARIST, “masterpiece” by Blues in Britain).
This is “How Can This Be” – the first song video from Eddie’s new band project from Italy called Big Red Radio: 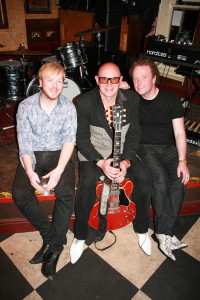 There is no doubt that Martin’s quarter century career of recording and performing has established his reputation as one of the most exciting and accomplished Blues Men alive today. He has invested most of his life in studying and contributing to the blues legacy. The impressive fruits of his considerable labours are plain to see – and hear – for those interested, but his determination to remain his own master, releasing his work only on his own label (Blueblood Records) may have kept his name below the radar for many.
Martin honed his skills touring the US, and lived for a while in Texas. Following his first acclaimed USA tour he was befriended by the Dallas/Fort Worth Blues community and toured and recorded with the “Texas Blues Kings” formerly with Smokin’ Joe Kubek. Cutting his playing teeth on the “chitlin circuit” he has had one-man band residencies on Beale St in Memphis and in the Jook Joints of Clarksdale, Mississippi.
As well as being recognised as a leading acoustic and electric guitarist he was also lauded as an Innovator for his rack-harmonica skills by the World Harmonica Festival in Germany where he performed solo, held a Masterclass and judged the World Blues Harmonica Competition.