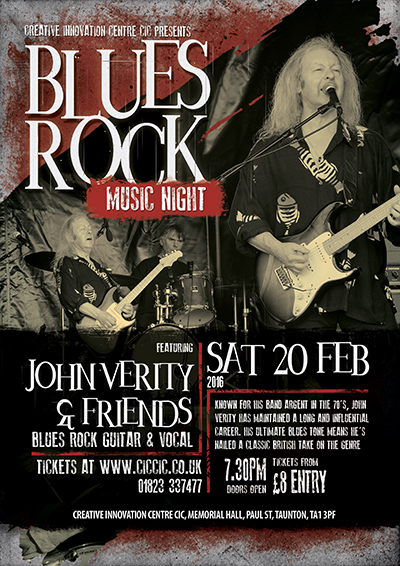 “A veteran performer at the top of his game – the playing is immaculate and full of passion, as you would expect from one of the UK’s leading exponents of blues guitar”
John Verity has had a varied and amazing career to date, including support dates with rock luminaries such as JIMI HENDRIX, JANIS JOPLIN, THE WHO, JOHN MAYALL’S BLUESBREAKERS, and MOUNTAIN, to recording dates with RINGO STARR, KEITH EMERSON, GREG LAKE, TIM ROSE, ZOMBIES, COLIN BLUNSTONE, PHOENIX, CHARLIE, and ARGENT to name but a few…
John Verity has recorded and toured constantly with his solo projects – always with that distinctive soulful blues edge – and collaborations both in and out of the studio.
Following an amazing 2015 which began with a number 1 album in the Blues charts and continued with sold out gigs/festivals in the UK and Europe; headlining in Germany to audiences in excess of 3,000 JV and the band are set to start 2016 with a bang!
The first key date in January 2016 is an appearance at the ‘Giants of Rock’ event, then a special performance at CICCIC, followed by shows across the UK and Europe once again, with trips to the States and even a series of dates in Russia.