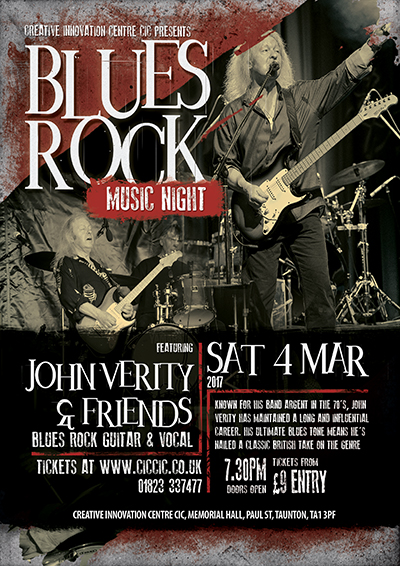 ‘A veteran performer at the top of his game – the playing is immaculate and full of passion, as you would expect from one of the UK’s leading exponents of blues guitar’
‘See The John Verity Band for some blistering blues with a rocky edge!’
John Verity has had a varied and amazing career, supporting rock luminaries such as JIMI HENDRIX, JANIS JOPLIN, THE WHO, JOHN MAYALL’S BLUESBREAKERS and MOUNTAIN and recording with RINGO STARR, KEITH EMERSON, GREG LAKE, TIM ROSE, ZOMBIES, COLIN BLUNSTONE, PHOENIX, CHARLIE and ARGENT to name but a few.
Recording and touring constantly, with his distinctive soulful blues edge, 2016 has, thus far, been John’s busiest in recent years and especially so with live appearances with his band; a fluid line-up but always with musicians of the highest professionalism and musicality.
For many of John’s recent performances he has been accompanied by Jamie Mallender on bass and our drummer, Liam James Gray, who have both been received with enthusiastic acclaim at numerous gigs this year. This will be The John Verity Band line up at Taunton CICCIC on Saturday 4th March 2017 and the guys are greatly looking forward to this event; one of the earliest dates in our New Year calendar which has already superseded 2016’s activity throughout the UK.
This appearance is one of many at high profile venues where John is pleasing old friends and winning over many new fans, as evidenced from comments at HRH Blues, Sheffield 02:-
‘For me, John Verity Band were the highlight of the weekend. I didn’t know what to expect but they’re awesome! I’m now a confirmed JV fan!’
‘I’m listening to John Verity today. I first saw him in Sheffield recently and was utterly stunned and gobsmacked by just how good he is. This guy has the best style and touch – as a player he makes me tingle. I would suggest to you all out there- miss this guy at your peril’.
John also found time in 2016 to record and produce the latest album ‘My Religion’ which was played on numerous radio stations, including Paul Jones ‘Nothing but the Blues’ on BBC Radio 2 and reached No.15 of the most played albums on the IBBA (Blues) charts earlier in the year.
Review below from ‘The Hat Reviews’ by Peter Elliott in October 2016:
‘When I told a colleague that I had been listening to John Verity’s new album, his eyes lit up – but instead of, as some of you might predict, banging on about Argent and Phoenix, he raved about seeing John recently in Sheffield with the ubiquitous and talented Jamie Mallender (bass) and Liam James Gray (drums) alongside knocking them dead with classic blues riffs at the sell-out HRH event at Sheffield O2.
This is a fine crafted album. It tells you all about the range of the artist. It has some terrific rocking moments, has some great lyrics and delivers both traditional and modern blues with some subtlety and you are left under no allusion that you are in the hands of a proper musician and vocalist who would have no problem filling a stadium, packing out any club and bringing a festival audience to their feet. And of course, it seems that is exactly what he is still doing. Go buy.’
Find more JV music and catch up with the news here: www.johnverity.com