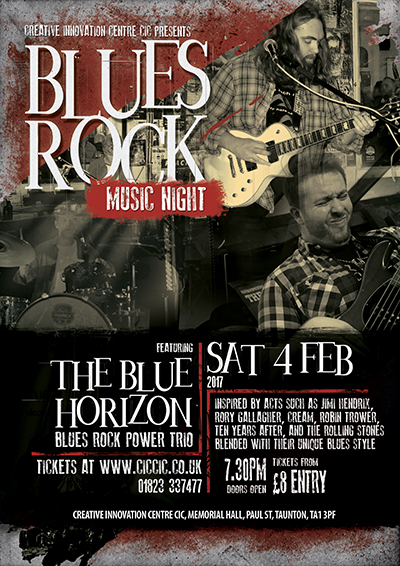 This amazing line-up of blues guitarist, musicians, songwriters and singers bring the whole spectrum of the blues rock and blues guitar and blue music to life in Taunton on Saturday 4th Feb and an excellent price for hearing from one of the UK’s top well-seasoned bands/artists from the blues music genre.
Not only will you experience a great performance but also some quality blues rock playing so if you love the influences of Jimi Hendrix, Rory Gallagher, Cream, Robin Trower, Ten Years After, and The Rolling Stones & more then this gig is for you and a night that you will never forget.
We are very excited to have

About The Blue Horizon

The Blue Horizon are the South West’s most exciting blues rock power trio, playing inspired 60s and 70s rock. Their sets are inspired by & taken from acts such as Jimi Hendrix, Rory Gallagher, Cream, Robin Trower, Ten Years After, and The Rolling Stones, resulting in their own rocking, innovative, original material.

In the last 2 years they have built a solid following playing festivals all over the country, including Skegness Rock and Blues, Bowness Bay Blues, Watchet Festival and Godney Gathering. They have supported international touring acts including Dan Patlansky, Ryan McGarvey and The Pretty Things, released a full length debut album and received national airplay from award winning blues hosts (Pete Feenstra and Gary Grainger to name but two).

With exciting new drummer Ryan Thrupp coming into the fold, and an arsenal of new material weaving through the set, The Blue Horizon are geared up for another exciting year gigging the UK and unique opportunity to see them live in Taunton’s best music venue CICCIC.