Put great voices, guitar, banjo, mandolin, uke, percussion and harmonies together and you get the amazing sounds of The Shillings, performing in the beautiful candle lit Memorial Hall at CICCIC.
This amazing band of talented songwriters, musicians and singers bring the whole country/folk roots music scene to life with a strong flavour of the South West in Taunton on Sat 17th June.

The Shillings are a 4 piece Country/Folk group, performing exciting & interesting songs that will capture your imagination as they take you on a musical journey… The Shillings will have you singing along on certain songs and move you to tears on others….”A great evening’s entertainment awaits , & you will almost certainly want to hear them again and again”.
The band are: 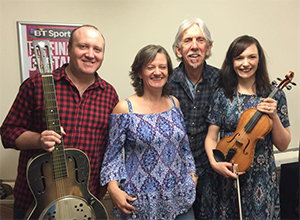 Barry Walsh on vocals & guitar. Barry is a songsmith of repute, penning beautiful songs such as ‘Bring her home’, ‘Porlock Hill’, ‘The Poppies of Failand’, ‘Beautiful Days’ , ‘Bristol Town’ and many more.
Graham J Nicholls on first guitar, lap steel,banjo, mandolin. Graham is a very well known guitarist here in the south west, performing with many bands in many musical genres including gypsy jazz and blues. Graham is the group’s multi-instrumentalist, able to bring songs to life with his breathtaking flair & sensitivity.
Sarah Mitchell on violin & vocals. Sarah has performed with 1980’s chart toppers ‘The Korgis’ and toured the US with them before performing with Stackridge for 4 years and joining ‘The Barry Walsh Band’ in 2011.
​
Louise Brent on vocals , Mandolin ,Uke , percussion. Louise has performed at Bristol’s Colston Hall on many occasions, with ‘The Barry Walsh band’ and with her own band. She released her Debut Album in 2013.