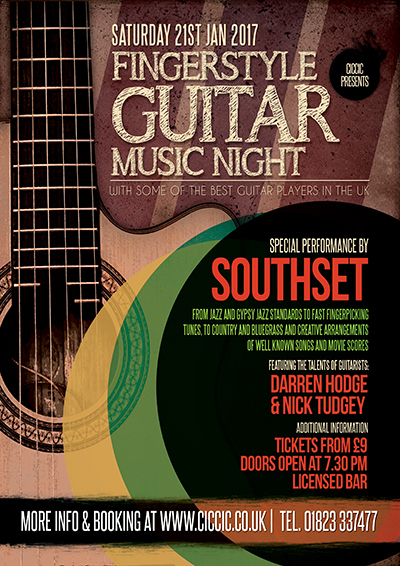 Sat 21st Jan 7.30pm-11pm. Tickets £10 or concession for Over 65’s and students £9. On the door price £12 & £11.
Be amazed by complex and beautiful guitar playing with guitar duo SouthSet all set in our amazing Memorial Hall with the friendliest atmosphere in Taunton.

SouthSet are an acoustic duo from England, made up of fingerstyle guitarists Nick Tudgey from Southampton (South) and Darren Hodge from Taunton in Somerset (Set).
They play a variety of music from Jazz and Gypsy Jazz standards to fast fingerpicking tunes, to Country and Bluegrass and creative arrangements of well known songs and movie scores, if you love acoustic music, they’ve got your interests covered. Both musicians are recognised and respected as solo performers in their own right, and as a result like to entertain their audiences with a three in one show of two solo performances and a variety of duets. 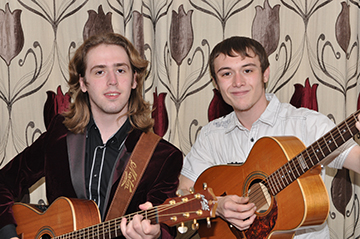 Described as live finger style guitar & entertainment full of passion and energy. Nick Tudgey is a solo guitarist from Southampton. Unlike a lot of similar guitarists, he focuses just as much on his playing as he does on being entertaining, whether he’s telling funny stories, one liners or playing two songs at the same time. He’s not just a guitarist, he’s fun for all the family and will not disappoint. His playing abilities have earned him the respect of world renowned fingerstyle guitarists Andrea Valeri and Michael Fix as well as Paul Sundt; One of the UK’s top guitar players and composers.

Darren James Hodge is a solo guitarist from Taunton, Somerset who is regarded by his peers as one of the top up and coming young guitarists in the country. After picking up his first guitar at the age of twelve, Darren has been astounding audiences up and down the country with his ability and instrumental style of playing. He has graced the stage with some of the top guitarists in the world including Tommy Emmanuel, Clive Carroll and Ben Hughes, all of whom are at the top of their field and have backed Darren as a future star.
An Event with an ID of "9337" could not be found. Please contact the event administrator for assistance.