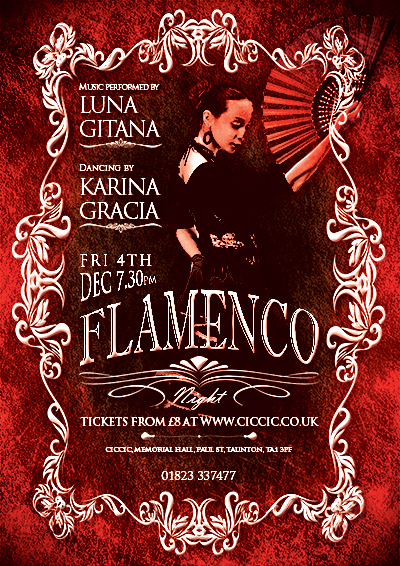 This amazing line-up of flamenco guitar players and flamenco dance brings the whole spectrum of the flamenco and Latin music to life in Taunton on Friday 4th December and an excellent price for hearing from one of the leading flamenco/Latin artists in the South West.
Licensed bar available. Spaces are limited so book early to avoid disappointment or refusal on the door.

Luna Gitana is the flamenco project of musicians David Nash & Jaime Cantera and flamenco dancer Karina Gracia.
David Nash
Dave Nash is a Flamenco Guitarist based in Bristol, He has been playing Flamenco and Classical guitar for 20 years, playing regularly in restuarants providing an authentic Spanish ambience as well as at parties, weddings and functions. He also works regularly with Flamenco dancers for shows and accompanying classes and teaches Flamenco Guitar as well as performing in a duo playing Gypsy Jazz/Flamenco, another duo playing Irish music and new band “The Jackalopes”
He began studying Classical guitar aged 10 attaining grade 8 aged 16 before later turning his attentions to the study of Flamenco guitar. He has studied under virtuosos such as Manolo Franco, Jose Antonio Rodriguez and Jose Luis Balao in Spain, and Francisco Antonio Clinton and Tito Heredia in this country.
Jaime Cantera
From northern Spain, Jaime (Jimi) grew up in a house full of music. From an early age Jimi would enjoy enormously hitting things with sticks (his first drum kit was 2 cardboard boxes and a bbq grill). He was always mesmerised by his fathers and uncle’s singing styles and these are still today a source of inspiration for his own singing. As a teenager Jimi developed his guitar, singing and drumming skills in bands attempting music by The Doors, King Crimson, Bob Dylan, Nirvana, Hendrix… but after moving to the UK he would find that whenever he would play more of his Spanish homegrown rumba flamenca and other Latin music. Now, singing flamenco comes from one thing mainly which is strong emotion. Like the blues. This became his goal, to express himself in the most raw, honest and deep way he could.
Regular trips to Andalucia, mainly Jerez de la Frontera, made him cross paths with the Agarrado-Moneo family, a long lineage flamenco family that is producing some of the best performers of this discipline.
In the UK Jimi performs regularly with other flamenco artists, applying his passion to all he does, be it guitar drum or song. Frequently it’s all three!
Karina Gracia
Karina Gracia dances flamenco with passion and power, her love of the fiery dance is contagious. Having studied the art of the dance both here and in Spain, Karina continues to further her dance with master teachers at Amor de Dios in Madrid, and in Andalusia. Karina teaches weekly classes, monthly workshops and performs regularly throughout the South West, with a variety of flamenco musicians.
Highlights for Karina include touring with the New Devon Opera as the lead dancer in Carmen in 2012 and a voluntary dance project in India in 2013.