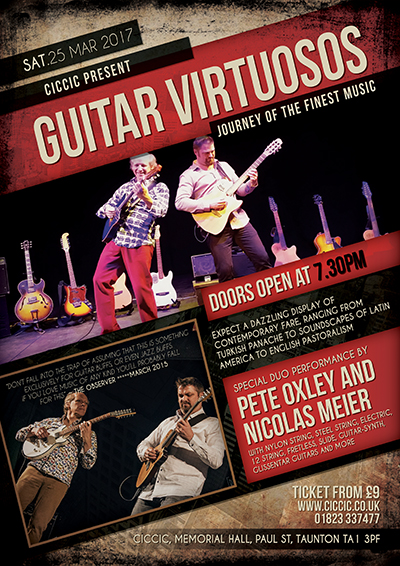 Sat 25th March. Doors 7.30pm. £10 or £9 concessions online or £11 or £10 on the door.
Join us for an amazing night of the finest music with guitar virtuosos Pete Oxley and Nicolas Meier.
Expect a dazzling display of contemporary fare, ranging from Turkish panache to soundscapes of latin America to English pastoralism. Hear this played on nylon string, steel string, electric, 12 string, fretless, slide, guitar-synth, glissentar guitars and more!
The Oxley-Meier guitar project will indulge your musical senses so “Don’t fall into the trap of assuming that this is something exclusively for guitar buffs, or even jazz buffs. If you love music of any kind you’ll probably fall for this”. ~ The Observer ★★★★ March 2015.

“This album is a wonderful example of the high level of music that can be made by combining two great guitarists/composers/improvisers such as Pete and Nicolas. They have put together a feast of virtuosity, delivered with depth, wit and joy” ~ Ralph Towner (Oregon etc.)
The above was pertaining to the brand-new double-CD, ‘The Colours of Time’ (MGPrecords CD019).
Following their previous release, ‘Chasing Tales’, the duo toured the UK extensively in 2015 (60+ dates), plus a further 25-date tour in the spring of 2016 – consistently garnering more-than-generous reviews from the national and specialist press!
Oxley & Meier were invited by Jazzwise to be the first ever featured artists to have a covermount CD attached to the magazine (December/January 2015/16 edition)!
The duo will be releasing their new album ‘The Colours of Time’ in February 2017, to coincide with another major UK spring tour (35 dates). This is their most ambitious album to date, in that it is a ‘double: one disc in duo format, the second in quartet with bass and drums. 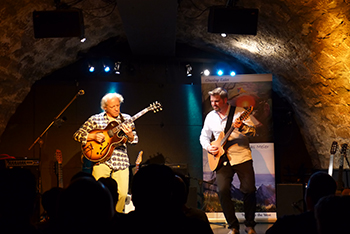 Pete began his musical career in Paris in the mid ‘80s before relocating to the UK in 1997. Shortly afterwards he opened The Spin jazz club in Oxford which in 2012 won the Parliamentary jazz award as ‘The Best Jazz Venue In The UK’. Pete regularly performs with some of the world’s leading jazz artists including Chris Garrick, Gilad Atzmon, Tim Whitehead, Dave O’Higgins, Bobby Wellins, John Etheridge and his own band Curious Paradise. He has now released 14 critically acclaimed CDs featuring his original compositions.
As a composer, Pete was recently selected as one of only a handful of British jazz musicians to have his compositions included in the definitive ‘European Real Book’ (Sher Music). www.peteoxley.com

With his unique style that is a blend of Metheny-esque jazz and Turkish inspired world music, Nick has toured extensively around the world with his band the Meier Group, sharing the bill with some of the biggest names in jazz including Bill Evans and Brad Mehldau. This wonderful band (featuring sax maestro Gilad Atzmon) won the overall prize for ‘best band’ at the Juan-les-Pins jazz festival!
His recent album Kismet is a wonderful heady mixture of Flamenco, jazz, Latin and Middle Eastern music. His prodigious jazz talent is matched by his other great passion: playing heavy metal guitar in his scorching group ‘Seven7’. Nick was, for the last three years, guitarist in guitar supremo, Jeff Beck’s band, with whom he toured all over the world, performing at major venues and festivals. He has recently recorded a stunning album with the A-lister rhythm section of Jimmy Haslip (Yellowjackets) and Vinnie Coliauta (Sting, Frank Zappa etc.). www.meiergroup.com/oxley-meier