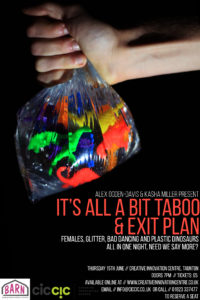 Both of our shows are performed by solo female artists, were written and devised ourselves and are autobiographical, so they tell a very true and honest story. Our aim is not only to entertain but also open up conversations about mental health and to normalize these conversations. It is our belief that sharing stories about mental health encourages others to do so without shame. Our hope is that by sharing our stories through the medium of theatre in an engaging, entertaining and thought-provoking way, we can begin to break down the stereotypes surrounding people suffering with a mental illness. We are both upbeat, happy and positive young people that just happen to have had an illness, it does not define our characters or who we are and we want audiences to understand that. The core essence of both pieces is finding ways the audience can relate to the symptoms of a mental health problem.
Our double bill performance is being supported by Take Arts BARN project. BARN is a three year initiative that supports Somerset’s emerging theatre-making sector to develop, test and showcase new work in a predominantly rural context. As emerging artists fresh out of university we appreciate this support into the industry that Take Art and BARN have provided.
Alex (It’s all a bit taboo)
My show was written and made whilst I was at university. We had a solo project and I racked my brains over what sort of show I could and wanted to make. At the time I was suffering quite severely with depression which I’d had problems with since my late teens. One of the only things that kept me going when I felt low was my love of performing and theatre so when conversations about mental health started opening up more in the media I thought if other people can be brave and unashamed, sharing their stories then why can’t I? Although the show is about depression it’s far from depressing, it’s a story about survival and love featuring glitter showers, bad dancing and astronaut singing. Truth and confession is spilled as much as all the glitter and the audience are taken on a journey through the mind of one person fighting for her life, for her happiness.
Kasha (Exit plan)
The typical stereotype of a young person or university student is that of a sociable, carefree party animal; out every weekend or week night, clubbing and dancing, chatting and laughing with minor worries and anxieties only popping up occasionally around assessment deadlines. But what if you live with anxiety on a daily basis? When I made my show I wanted to make a performance that laughed at myself, that laughed at societies social pressures and conducts whilst also approaching the topic of anxiety and telling a true story about the pressure of living with it as a young person. My show is about the joys of staying in, the pressure of being sociable in an antisocial age and living with severe anxiety. Combining puppetry, performance poetry, physical theatre and a no can do attitude this show is everyone’s idea of a perfect night in!