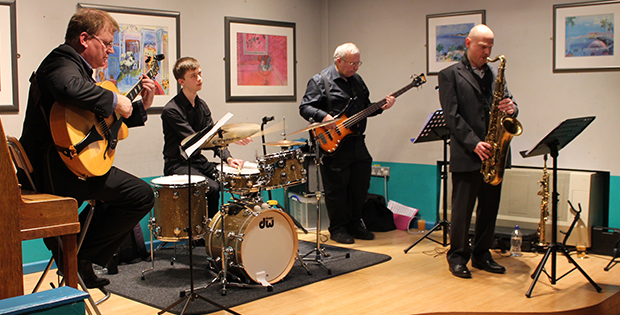 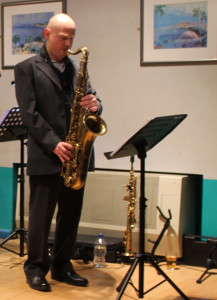 Daniel Pogorzelski – Tenor and soprano saxophone player. Daytime – professional woodwind instrument technician, after hours, jazz maniac as his friends called him. In truth, he can honestly admit to fall in love with jazz many years ago. In the past (back in Poland) being involved with some fusion jazz projects and avanguard experiments. Nowadays mainly plays with big bands and enjoying very exciting project with his quartet. 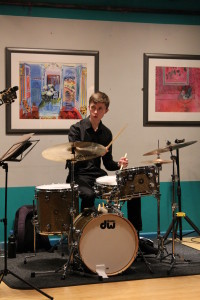 Matt Evans – Over his years of playing, he has played a variety of different musical styles: from side drum in Symphonic Orchestras and Wind Bands to Heavy Rock bands and Jazz Quartets on drum kit. He has supported such acts as ‘Labyrinth’ at the 2012 Olympic Torch relay visit to Taunton and the Pete Long band performing Benny Goodman’s renown 1938 Carnegie Hall Concert. As he began to play more and more, he discovered that his love was jazz – especially Quartet Jazz from the ’50s and ’60s. Recently, he has focused on his passion for Quartet Jazz and co-founded an exciting new project – the ‘Daniel Pogorzelski Quartet’. 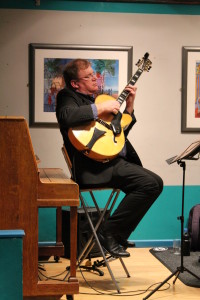 Richard Llewelyn – Guitar. Brought up in a jazz mad household he has been playing guitar for 43 years. He has worked in education, played with Arcadia Jazz Band for 18 years and has been fortunate to work alongside artists such as Kathy Stobart, Tony Roberts, John Critchenson, Rosemary Squires, Pete Strange, Chris Gradwell and Henry Lowther and played in support bands for the likes of Humphrey Lyttleton, George Melly, Kenny Ball and Aker Bilk. He has regularly ‘woodsheded’ with Tony Roberts since 2008 developing musical ideas and techniques and regularly deputises for other bands. He is very much enjoying playing in the Daniel Pogorzelski Quartet. 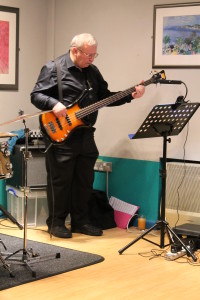 John Day – Has been playing Bass semi-pro since age 16 – When his day job became redundant in 1993, studied full time at Leeds College of Music. He has been pro ever since – Playing gigs, hotels & clubs, backing cabarets, residencies on holiday parks, cruise ships and theatre contracts.John is also experienced in arranging in all styles / genres of music. 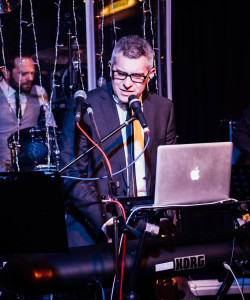 Bruce Izzett – started playing with bands in his late teens and by twenty was playing professionally around his native country Zimbabwe. After fronting a well known Zimbabwean rock band and playing with a number of gospel artists, Bruce shifted to more jazz. Having moved to the UK, Bruce continues to play jazz regularly and his musical endeavours include TV work, studio and theatre playing.
This is surely to be an exciting jazz music event for any music lover and a line-up of some quality talented musicians so book your ticket and enjoy a great night out.