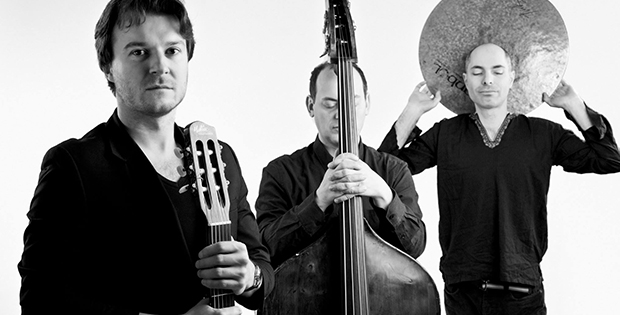 7.30 – 11.00pm. £9 or £8 concession online or £10 or £9 concession on the door.
Join us for an amazing night of jazz from composer and guitarist Maciek Pysz Trio from London who present music from the critically acclaimed new album ‘A Journey’ released on Dot Time Records. An unforgettable evening of world music, jazz and fusion combined with heart touchinh melodies. The Trio is famous for amazing energy and interaction on stage. 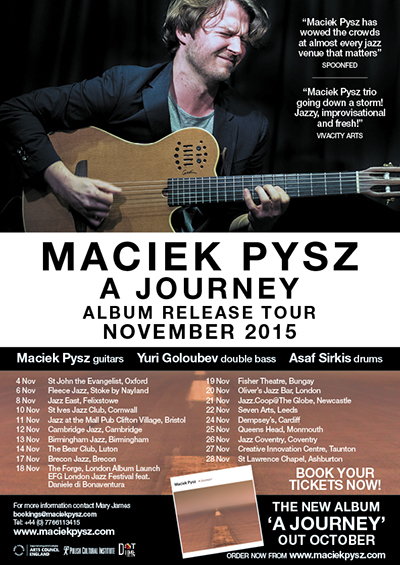 Maciek Pysz is a composer and guitarist who is creating the best work of his career, so far, in his second album ‘A Journey’, to be released on Dot Time Records.
‘A Journey’ was recorded at Artesuono studio in Italy and takes his work to another dimension, reaching new heights stylistically, technically and emotionally. By using the eloquence and dance rhythms of a bandoneon and piano, Maciek’s music describes his feelings about the people and places he encountered on his travels across Europe. He fell in love with the sound of the bandoneon instantly! It brings a magical atmosphere and something from another era to his music. It also provides a feeling of longing and nostalgia with which he identifies.
He is joined on the album by ECM artist Daniele di Bonaventura on bandoneon and piano, along with his long-standing trio of double bassist Yuri Goloubev and drummer Asaf Sirkis.
Maciek’s sound is warm, natural, conversational and his style is unhurried. Audiences are captivated by his original compositions, the delicacy and beautiful phrasing, the passion and joyfulness of execution.
Since moving to the UK in 2003, the self-taught Pysz rapidly established his reputation and toured in the USA and Europe with his own projects and as a sideman. Maciek has played at Ronnie Scott’s, Pizza Express Jazz Club, The Forge, La Note Bleue, Blue Note Poznan, London Jazz Festival, Hull Jazz Festival and Ealing Jazz Festival to name but a few venues and festivals. ‘A Journey’ will be launched at The Forge, London on 18 November 2015 during the EFG London Jazz Festival.
“Pysz’s lead lines are forceful and upbeat, his rhythm playing fulltoned” Bruce Lindsay (All About Jazz)
“…a major new presence on the jazz guitar scene” Stephen Graham (Marlbank)
Lineup:
MACIEK PYSZ
acoustic & classical guitars
YURI GOLOUBEV
double bass
ASAF SIRKIS
drums & percussion