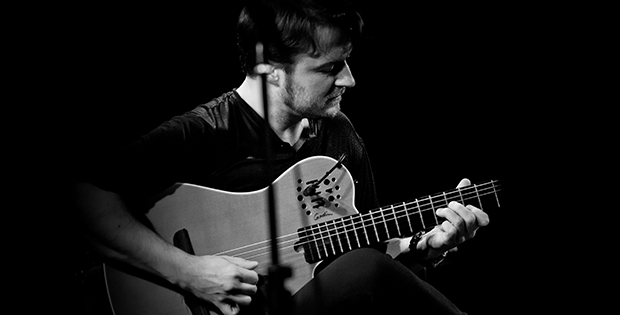 Virtuoso guitarist Maciek Pysz is back in town presenting his new drumless quartet. The band will premiere some of Maciek’s new works inspired by the drumless sound as well as some older compositions specially arranged for this instrumentation. His stellar quartet features Yuri Goloubev on double bass, John Turville on piano and Adam Spiers on cello. Maciek says “I love exploring the space provided by the lack of drums and having the cello as well as double bass in the lineup allows for more orchestral arrangements. I can’t wait to hit the road again and play you some new music plus older works with a fresh twist!”

“Pysz is a quiet virtuoso who has developed into one of the most distinctive guitarists around.” Ian Mann, The Jazz Mann

“Your tone is beautiful and there is some real sensitivity in your music which is what the world needs” Kai Eckhardt (bass player: John McLaughlin, Steve Smith)

Of his live performances, one critic referred to the “refreshingly clean, quicksilver beauty of Maciek Pysz’s guitar”.

Maciek Pysz is a guitarist and composer known for his clear lyrical phrasing, his virtuosity and his imaginative cinematic compositions. He has performed with Daniele di Bonaventura, Tim Garland and Francois Arnaud and has appeared in festivals and clubs in the UK, France and Italy. His two albums feature his Trio with Yuri Goloubev and Asaf Sirkis, and Daniele di Bonaventura appears on his second album, A Journey. This album, released on Dot Time Records, received several 4 stars reviews.

As well as being a leader of his own groups Maciek works with other projects, including two in France. His recent projects include a duo with Ivo Neame. He also plays with the Julian Costello Quartet and as duo with guitarist Gianluca Corona.