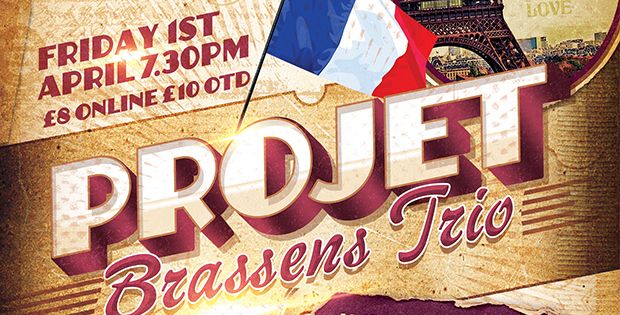 Join us for a unique night of jazzy French Music in Taunton’s candle lit jazz club, CICCIC. Friday 1st April 2016. £8 online or £10 OTD. Students and over 65 £7 online £9 OTD.
Projet Brassens Trio will present jazz interpretations of the music of the great French singer-songwriter Georges Brassens.
You don’t need to speak French to enjoy a Projet Brassens concert; Maxine explains the songs in English before singing them in French. And if you speak French then you may even want to sing along. 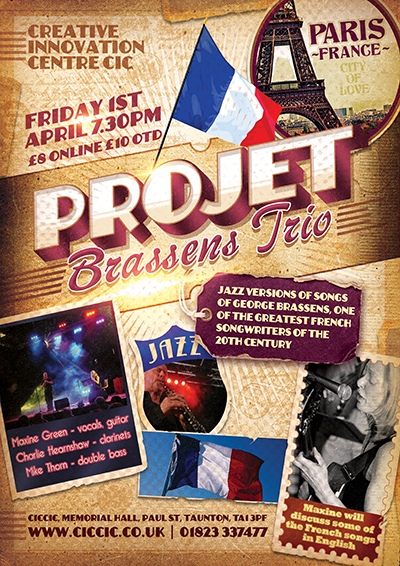 Projet Brassens have recorded three acclaimed albums, been featured on British and French national TV, and performed at festivals across England, France and Belgium.
Projet Brassens Trio are;

Projet Brassens most recent television appearances was on BBC Mastermind. Projet Brassens’ Charlie Hearnshaw says: “When I first publicised that we were going to be on Mastermind I was flattered when one of our friends asked which one of us would be answering questions. In fact we were there to play music! One of the contestants had chosen Georges Brassens as his specialist subject, and our job was to play a couple of his songs.”
Charlie has a local connection; he has taught clarinet and saxophone at Kings College, Taunton for about twenty years and has performed at CICCIC many times with many standing ovations.