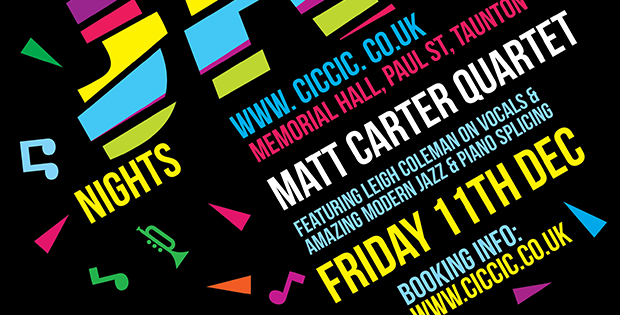 7.30 – 11.00pm. £8.50 or £7.50 concession online or £10 or £9 concession on the door.
Join us with amazing jazz pianist Matt Carter Quartet featuring Leigh Coleman for an amazing night of top quality jazz at CICCIC’s jazz club.
At only twenty years old, Matt Carter has quickly established himself as one of the busiest musicians in the South West, playing with many internationally known artists such as Joss Stone, Beverly Knight and Mica Paris, as well as visiting jazzers like Alan Barnes, Brandon Allen and Greg Abate.
By way of a musical splice, his special guest tonight is Leigh Coleman, a vocalist who is quickly becoming synonymous with soul music in the UK. He’s sung with Joss Stone and Solomon Burke, and performed alongside Sandie Shaw, Beverly Knight and Natalie Williams. His debut EP entitled ‘It Is What It Is’ was recorded in Miami and produced by Grammy award winning Miami soul legend, Betty Wright. Complemented by a bassist who’s appeared on record alongside some of Cuba’s best-known voices, and the most locally in demand drummer who’s studied at the musician’s institute in London, this promises to be a great evening of diverse musical influences.
‘It’s not very often you come across someone with bags of soul like Leigh. He’s entirely captivating, magical and puts a unique and modern twist on classic soul-driven, hook-laden acoustic grooves.’ Guy Little, Editor, Acoustic Magazine