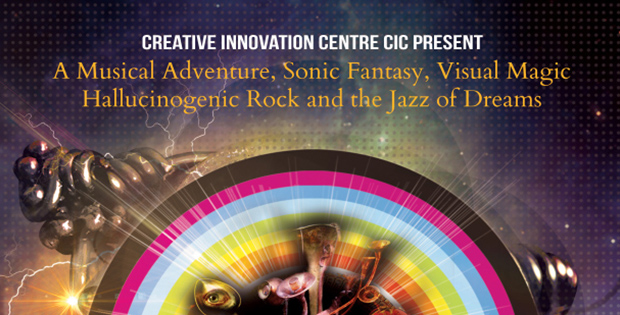 Friday 14th April 7.30pm-11:00pm. £8.00 or £7.00 concession if booked online, or £10 on the door with £9 concession.
Join us for a creative musical adventure of sonic fantasy, visual magic, hallucinogenic rock and the jazz of dreams with Mandragora that includes 4 amazing creative musicians and bands. 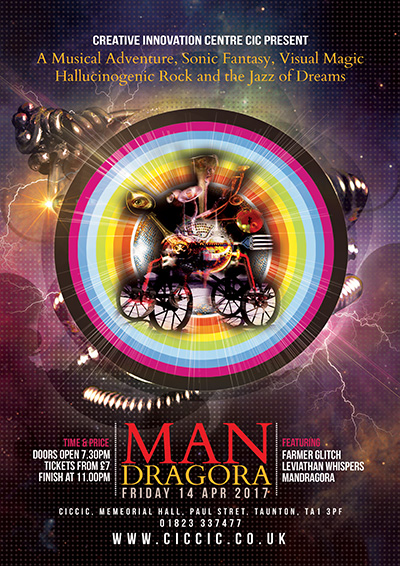 Farmer Glitch and Leviathan Whispers
An evening of musical adventure, sonic fantasy and visual magic as electronica, art rock, altered beats, free jazz and funk combine with evocative projections and films.
The gig features new band Mandragora, in a double bill with Somerset sound legend Farmer Glitch supported by the ambient sound and visual world of Leviathan Whispers and  the first screening of a new short film by Jo Fairfax.
Mandragora create a musical delirium out of big riffs, soaring violin, atmospheric keyboards and powerful drums. The band feature two of Somerset finest young musicians Jo Meikle on drums and violinist Aninka Newman, together with highly experienced musicians Sean Davie on bass and Mike Hurly on keyboards. The band’s music has been created by local musician Tim Hill. Tim creates dramatic music drawing on his main musical influences, dub, post punk rock, free jazz and folk music, he was last seen leading a 20ft giant puppet Crom into Trafalgar Square.
Farmer Glitch creates entrancing soundscapes out of an extra-ordinary array of circuit bent toys, electronics and old technologies. He was one half of the acclaimed duo Hacker Farm, recently featured in articles in the Guardian and The Wire. He creates bespoke hand-made instruments/sound machines by hacking and adapting found objects and redundant technologies, opening up new avenues for performance.
‘utterly compelling’ The Guardian
www.farmerglitch.net
Leviathan Whispers is Tim Hill solo project. A series of soundscapes shaped out of samples of sound sculptors by Michael Fairfax, recordings of fields in Somerset, warped beats and saxophone improvisations. Leviathan Whispers is inspired by dreams of lost worlds, sunken landscapes, inner seas, the forests of the brain and the beasts that haunt them. Film maker has created a short animation inspired by the music and the set will also feature cartoon and collages by artist Dave Young.