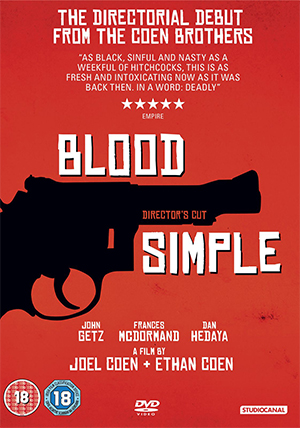 Neighbourhood Cinema movie night at CICCIC with Crime, Drama, Thriller film ‘Blood Simple’. 7.30pm.
Storyline: A rich but jealous man hires a private investigator to kill his cheating wife and her new man. But, when blood is involved, nothing is simple.
The first film directed by the hugely influential and popular Cohen brothers. they went on to make “O Brother where art tho” “Fargo” and the “Big Lebowski” to name a few. Usually directing and writing their own films “Blood Simple” is a hugely inventive film that shows the skill that would later grace such diverse films they have directed over the last 30 years.

Abby is cheating on her bar owner husband, Marty with Ray one of the bartenders. Marty uncovers their sordid affair and is so enraged by their deceit that he hires Visser, an unscrupulous detective, to kill both of them. Unbeknown to Marty, Visser has other, more lucrative plans of his own. So begins a calculating round of lies and deceit that build to a chilling, suspense filled climax.