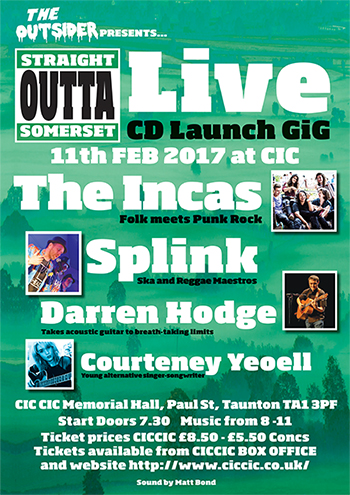 Sat 11th Feb 7.30-11pm. Tickets £8.50 student concession £5.50.
Join us for an amazing night of 4 talented bands and musicians in the amazing atmosphere of Creative Innovation Centre (CICCIC).
Presented by ‘The Outsider’ this event is to celebrate one of the largest collaborations of Somerset bands/artists. Creating a CD compilation of Somerset bands/artist, which has not been done for over a decade.
The CD named ‘Straight Outta Somerset’ is the 20 track compilation album for unsigned music talent from across Somerset. Join us for four acts Straight Outta Somerset Live!
We are pleased to have: 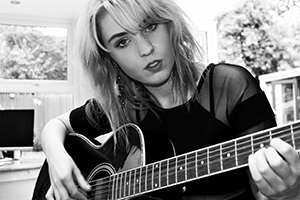 Courteney Yeoell is a young singer-songwriter from Ilminster,who has been singing in bands for a number of years, ranging from classical to alternative rock. Her band The Edge of Knowhere has played the CICCIC before to great praise and her new band FAWNER is recording new material. Courteney has a voice that is both powerful and vulnerable and this concert will give the audience the chance to hear her in an acoustic format. Courteney’s voice is unique but has been compared to Deborah Harry’s by more than one reviewer. Her song ‘(You) Win Me Over Again’ appears on the compilation album ‘Straight Outta Somerset’. 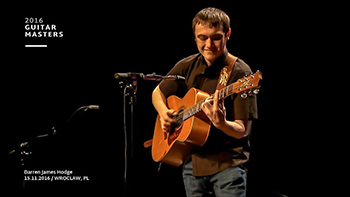 Darren has been astounding audiences up and down the country with his ability to take the acoustic guitar to breath-taking limits. His instrumental playing spans a repertoire of Blues, Jazz, Country, Gypsy Jazz and Travis Picking, and audiences are mesmerised with the challenges that Darren sets himself.
Darren, who hails from Taunton, has shared the stage with some of the world’s best artists, including Tommy Emmanuel, Megson, Cara Dillon, Seth Lakeman and Lulo Reinhardt. He reached the final 10 of the BBC Radio 2 Young Folk Awards in 2014 and in 2015 took part in the Sky Arts TV Competition Guitar Star. In 2016 Darren came 7th in the international Guitar Masters, showing that he is indeed a world class guitarist. The instrumental track ‘Echoes/Initiation’ is from his album ‘The Road To Nashville’ and appears on the compilation CD ‘Straight Outta Somerset’.
https://www.facebook.com/DarrenHodgeMusic/ 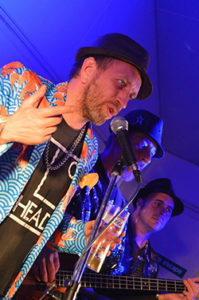 Splink are one of the most fun bands you will ever see. With a guitarist from Taunton and the front man who divides his time between Bridgwater and deepest darkest Devon they are a treasure of the South West music scene.
This 5 piece straddles the Ska and Reggae genres with influences including The Blockheads, The Specials and Bad Manners. According to Plymouth Punk Picnics: “The spirit of Ian Dury is alive and well in this sharp-suited, bouncing-booted, party-popping ska-punk 5-piece. I defy feet to keep still or mouths not to broaden within minutes of exposure to the infectious fun times of Splink.” They won Best Ska Band in the 2015-6 Outsider Awards and their song ‘Grab The Moment’ is on the ‘Straight Outta Somerset’ compilation and appears on their self-titled EP.
https://www.facebook.com/Splinkerss/ 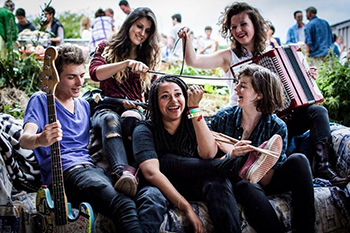 The Incas are a folk rock group from in and around Taunton. They take a wide range of influences from across the musical spectrum and make their own arresting sound, with Jazz, Folk and Ska music given a darker twist to create modern, alternative rock imbued with a Punk Rock attitude.
The Incas are without doubt one of the finest young bands in the South West today and their live sound is nothing short of astounding and unique, winning best Folk/Rock Band in The Outsider Awards this year.“I love the lyrical content and the way they play with loud and quiet contrasting sounds and genres. Every member is unique as is the band, no one sounds like them.”says The Outsider.They have just released their 2nd EP ‘Good to Know, Glad To Hear It’.Their song ‘Caramella’ appears on the compilation ‘Straight Outta Somerset’ and is from their first EP ‘Feed Me’.
https://www.facebook.com/theincasband/