The ‘THEN & NOW’ exhibition at the CICCIC.
Tuesday – Saturday 9.30 – 4pm.
Features art work by 4 art school students of the swinging 60’s – 3 from the Somerset College of Art, which once stood in Corporation St, Taunton, and one from Grays School of Art, Aberdeen. 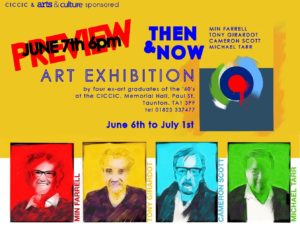 The show will be featuring some of the ‘NOW’ with new work produced specifically for the exhibition, and some of the ‘THEN’ to remind us of what exciting times the 60’s were.
Nearly 60 years on and these artists haven’t lost their touch, in fact they are just as productive as ever – Tony Girardot is currently producing a series of mixed media paintings, Cameron Scott will be showing some new relief carvings for the first time, Michael Tarr will be showing his recent ‘remains and ‘glimpse’ paintings, whilst Min Farrell will be exhibiting a facsimile of her acclaimed 60’s Pop Art thesis.
If you have only heard about the 60’s, or you ‘were there’, you’ll be able to meet the artists who contributed to the art and fashion explosion which made Britain the place to be by going to the evening preview on June 7th starting 6pm. Not to be missed!
MIN FARRELL went to Somerset College of Art from 1960-65 and taught in Salford and Nottingham before taking a post at Frome College in printed textiles in 1975. Amongst her achievements were producing a mile of bunting for the Frome 1300 celebrations. Her ‘Screen Printing and Textiles’ was published in 2002 by Schools Planet Publishing. She still takes commissions for work in painting, drawing and photography.
TONY GIRARDOT was a student of graphic design and illustration at the Somerset College of Art in 1961, graduating 1966. He became freelance in 1970 but, despite achieving success in this field, turned his back on the commercial art world preferring to choose art projects of personal interest. Constantly innovating in all media with a particular interest in cognitive psychology, he was also featured by Aesthetica Magazine in their top 100 contemporary international artists.
CAMERON SCOTT went to Gray’s School of Art in Aberdeen in 1962 and worked in
fashion houses in Italy and France before returning to this country where he taught in Art schools from Falmouth to Salford. Although trained in textiles he took up carving in 1975 and produces figurative relief wood carvings. He has exhibited throughout the country including the Saatchi Gallery and the Portico Gallery Manchester.
MICHAEL TARR studied at Somerset College of Art in 1962 for 3 years and still paints and exhibits widely. He has exhibited at the RA Summer and the RWA Autumn Exhibitions on numerous occasions as well as many solo and mixed shows in the South West and beyond. In 2016 he was selected again for the RWS Watercolour Show together with the prestigious Sunday Times Watercolour Exhibition.