Doors open 12pm. Band on from 12.15- 1.15. Tickets £5 online or door
(booking online is the only guarantee of entry as these concerts are proving very popular!)
The DPQ appear again as the Guest Big Band this summer. 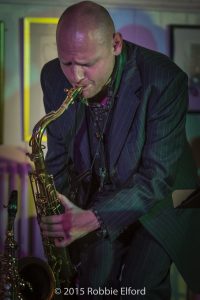 The DPQ (Daniel Pogorzelski Quartet) play straight ahead acoustic jazz influenced by 50s/60s/Blue note and have twice supported Pete Long and his Goodmen (Ronnie Scott’s Big Band) – 2014 Benny Goodman & Glenn Miller – 1939 Carnegie Hall Jazz Concert.
Daniel Pogorzelski – Tenor and soprano saxophone player. Daytime – professional woodwind instrument technician, after hours, jazz maniac as his friends called him. In truth, he can honestly admit to fall in love with jazz many years ago. In the past (back in Poland) being involved with some fusion jazz projects and avanguard experiments. Nowadays mainly plays with big bands, New Orlean influenced street music with LittleBigHorns, and enjoying very exciting project with his quartet.

Richard Llewelyn –  Brought up in a jazz mad household he has been playing guitar since he was 7. He has worked in education, played with Arcadia Jazz Band for 18 years and has 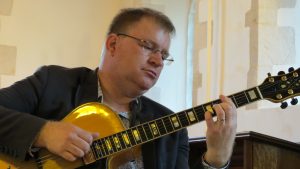 been fortunate to work alongside artists such as Kathy Stobart, Tony Roberts, John Critchenson, Rosemary Squires, Pete Strange, Chris Gradwell and Henry Lowther and played in support bands for the likes of Humphrey Lyttleton, George Melly and Kenny Ball. He has regularly ‘woodsheded’ with Tony Roberts since 2008 developing musical ideas and techniques and regularly deputises for other bands. He currently regularly plays with The Daniel Pogorzelski Quartet, Rebecca Chambers’ New Tricks, Tony Roberts, Rachael Roberts & the Gatsby Gang and Duncan Anselm’s Blue Note project.
Ian Evans is a professional drummer and percussionist from the South West. Starting his 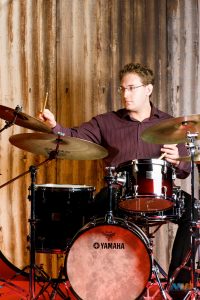 playing career at the tender age of 3, he has spent many years honing his musical skills with various outfits including his own ensemble, Apollo Jazz, at Bath Spa University and during a stint with NYJO. He prides himself on being versatile and always using his ear. He loves playing most styles of music but jazz, latin and funk are his favourites. Ian is proud to be a Roland Teacher Ambassador and JHS KeyPlayer.”
Jim Pullen has played trombone and bass professionally since the age of 19 and has been fortunate enough to have toured the world playing tours and gigs as far afield as Japan, the USA, Hong Kong as well as all over the European continent.
Jim at one point joined the RAF as a Musician, where the majority of his time was spent 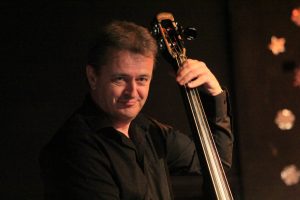 touring with “Squadronaires” Big Band, an experience that he has fond memories of.
Jim currently holds the bass chair with the Boulevard big band in the Bristol area and can regularly be seen in “middle earth”, or the “theatre pit” as theatrical societies like to call them on both bass and trombone…if forced. Jim is thrilled to be playing jazz again, this time with the Dan Pogorzelski Quartet.