Two Films brought to you in conjuction with the Eddystone Trust to demonstrate how far society has come.
Screening “Pride” at 4 pm and “Dallas Buyers Club” at 7 pm – both films £5 each 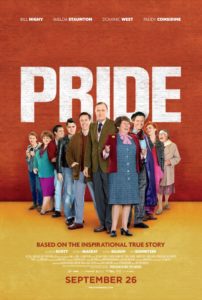 U.K. gay activists work to help miners during their lengthy strike of the National Union of Mineworkers in the summer of 1984.

In 1984 20 year old closet gay Joe hesitantly arrives in London from Bromley for his first Gay Pride march and is taken under the collective wing of a group of gay men and Lesbian Steph, who meet at flamboyant Jonathan and his Welsh partner Gethin’s Soho bookshop. Not only are gays being threatened by Thatcher but the miners are on strike in response to her pit closures and Northern Irish activist Mark Ashton believes gays and miners should show solidarity. Almost by accident a mini-bus full of gays find themselves in the Welsh village of Onllwyn in the Dulais valley and through their sincere fund raising and Jonathan’s nifty disco moves persuade most of the community that they are on the same side. When a bigot tries to sabotage the partnership with a tabloid smear Mark turns it back on her with a hugely successful benefit concert to which most of the villagers, now thoroughly in tune with their gay friends, turn up. The miners are defeated and return to work but at the Pride march goes on …
“Dallas Buyers Club” (2013) Running time 1 hr 59 mins – certificate 15 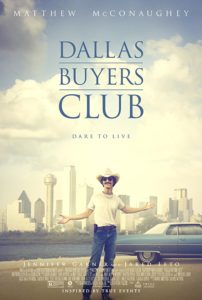 In 1985 Dallas, electrician and hustler Ron Woodroof works around the system to help AIDS patients get the medication they need after he is diagnosed with the disease.
Dallas 1985. Electrician and sometimes rodeo bull rider Ron Woodroof lives hard, which includes heavy smoking, drinking, drug use (primarily cocaine) and casual sex. He is racist and homophobic. While in the hospital on a work related injury, the doctors discover and inform him that he is HIV+, and that he will most-likely die within thirty days. Ron is initially in angry denial that he would have a disease that only “faggots” have, but upon quick reflection comes to the realization that the diagnosis is probably true. He begins to read whatever research is available about the disease, which at this time seems to be most effectively treated by the drug AZT. AZT, however, is only in the clinical trials stage within the US. Incredulous that he, as a dying man, cannot pay for any drug which may save or at least prolong his life, he goes searching for it by whatever means possible. It eventually leads him to Mexico and a “Dr.” Vass, an American physician whose license was revoked…..