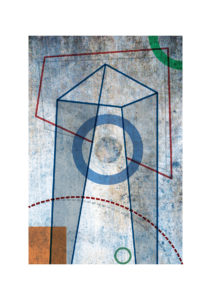 Brutalism refers to a particular moment in post-war British architecture that highlighted the use of concrete and functionality [architects such as Alison & Peter Smithson, Ernő Goldfinger, Owen Luder] and also a broader phenomenon during the 1950s, 1960s and 1970s of a sculptural Modernism rendered in concrete by artists such as Eduardo Paolozzi, Lynn Chadwick, Kenneth Armitage, etc.
Although both born in Taunton, Rob spent his formative years growing up in Portsmouth surrounded by post-war concrete and undeveloped bombsites [his playground]; Roger moved to London in the mid-80s and, along with fashion photography and commercial commissions, began to explore and photograph his urban environment: architectural detail, texture/surface and history.
The exhibition will consist of 16 large prints accompanied by projected moving image and selected music.
It will be open for view at CICCIC from Wednesday 1st November until Saturday 25th November.
There will be a Preview Night on Wednesday 1st November from 6.00pm to 9.00pm.