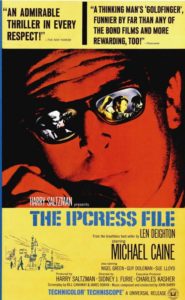 “Ipcress File” (1965) certificate A – running time 1hr 49mins
A number of leading Western scientists have been kidnapped only to reappear a fews days later. Unfortunately, each scientist has been brainwashed and is now completely useless. The British send their agent, Harry Palmer, to investigate. Palmer is surprised to be selected for such a mission (considering his past) and believes he has been chosen because he is expendable.