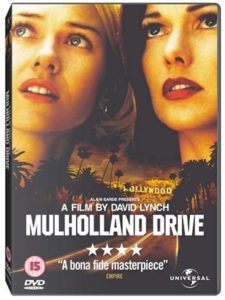 “Mulholland Drive” (2001) – Cert 15 – Running Time 2 hrs 21 mins – Director David Lynch
After a car wreck on the winding Mulholland Drive renders a woman amnesiac, she and a perky Hollywood-hopeful search for clues and answers across Los Angeles in a twisting venture beyond dreams and reality.

A bright-eyed young actress travels to Hollywood, only to be ensnared in a dark conspiracy involving a woman who was nearly murdered, and now has amnesia because of a car crash. Eventually, both women are pulled into a psychotic illusion involving a dangerous blue box, a director named Adam Kesher, and the mysterious night club Silencio. Written by Anonymous