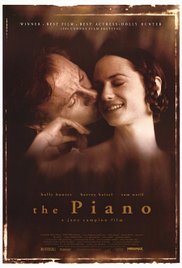 “The Piano” – (1993) certificate 15 – Running Time 2 hrs 1 min – Director: Jane Campion
A mute woman is sent to 1850s New Zealand along with her young daughter and prized piano for an arranged marriage to a wealthy landowner, but is soon lusted after by a local worker on the plantation.
Story: It is the mid-nineteenth century. Ada is a mute who has a young daughter, Flora. In an arranged marriage she leaves her native Scotland accompanied by her daughter and her beloved piano. Life in the rugged forests of New Zealand’s North Island is not all she may have imagined and nor is her relationship with her new husband Stewart. She suffers torment and loss when Stewart sells her piano to a neighbour, George. Ada learns from George that she may earn back her piano by giving him piano lessons, but only with certain other conditions attached. At first Ada despises George but slowly their relationship is transformed and this propels them into a dire situation.