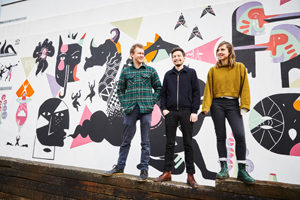 PELLÉAS ENSEMBLE AND FRIENDS
There has been a change to the group coming for this tour. Oliver Wass has broken his thumb which is awful for him and sad for us.
We are very grateful to Luba for managing to put together a lovely flute quartet to take the place of the original grouping and programme. Luba and Henry are still coming and they are bringing ELOISA-FLEUR THOM and MAX RUISI with them. We are so fortunate that they are free to be with us as even musicians are allowed to go on holiday at this time of year!Pelleas – 4 August 18 – CICCIC v2 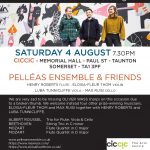 ELOISA-FLEUR THOM is a prize-winning violinist, director and curator. Highlights of her career so far have included performing J.S Bach’s Concerto for two violins with the celebrated violinist Maxim Vengerov, and chamber music with Radiohead’s Jonny Greenwood (LCO soloists). In the past few years Eloisa-Fleur has given performances at the Barbican, Wigmore Hall, Kings Place, the Southbank Centre’s ‘Deep Minimalism’ festival, St George’s Bristol, and has been broadcast live on BBC Radio 3 and BBC Radio 6. In 2015/16, Eloisa-Fleur held a creative residency at Heima in Seydisfjordur, Iceland. Eloisa-Fleur is the Artistic Director and Leader of the 12 ensemble, London’s un-conducted string orchestra, whose recent projects have included commissioning a new dance work from acclaimed choreographer Alexander Whitley as part of an Aldeburgh Music Residency, and giving the UK premiere of a work by Bryce Dessner at Kings Place. The ensemble recently toured Germany with Max Richter performing at the Berlin Philharmonie, Düsseldorf Tonhalle and Hamburg Elbphilharmonie to sold-out audiences. Their debut album ‘Resurrection’ will be released on the label Sancho Panza in September 2018.
https://www.eloisafleurthom.co.uk/
British/Sicilian cellist MAX RUISI has emerged as a charismatic and expressive young artist with an international career built around his love of chamber music. Cellist of the award-winning Ruisi Quartet alongside his violinist brother Alessandro, Max is also the founder & Artistic Director of The 12 ensemble, recognised as one of the UK’s leading string orchestras. He has performed in major concert halls and festivals throughout Europe and Asia, and in 2017 recorded as a soloist for Decca Classics with Ola Gjeilo.
Recent highlights include appearing as a soloist at the Barbican (Sound Unbound Festival 2017) and performing chamber music alongside the Berlin Philharmonic’s principal oboist Albrecht Mayer at the Reeperbahn Festival. Max also collaborates with a wide range of artists, regularly working closely with composer Max Richter and appearing on Radiohead’s latest album ‘A Moon Shaped Pool.’ Upcoming highlights for 2018 include performances at the Elbphilharmonie, Berlin Philharmonie and the Staatskapelle Dresden.
https://www.maxruisi.com/
The Pelléas Ensemble was formed at the Guildhall School of Music and Drama in 2011. Playing with “verve and polish” (The Times), they recently won the Royal Philharmonic Society’s Henderson Chamber Ensemble Award, and the 2017 Elias Fawcett Award for Outstanding Chamber Ensemble at the Royal Overseas League competition. In 2016 they won both the Grand Prize and the Audience Prize in the St Martin-in-the-Fields Chamber Music Competition, and won a place on the prestigious Tillett Trust Young Artists’ Programme. In 2015 they won First Prize at the British Harp Chamber Music Competition.
https://www.pelleasensemble.co.uk