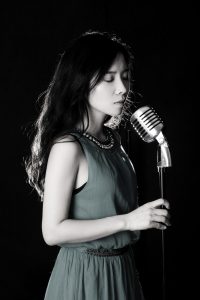 Tickets £12 on the door, £10 online Concessions £8 students/unwaged/income support.
‘Yunmi Kang and Sangyeon Park with the BEJE trio’
Bristol, Europe’s Green Capital in 2015, has long had a world-famous cultural buzz about it. It draws in talented players from around the world and several of these come together in this new band. Whilst original its influences straddle Fusion to Free Form, Township to Turkish, Monk to Soul.
Dave Mowat: BEJE started when I felt ready to make my own jazz statement again. Bristol jam sessions were a mecca for musicians from all over the world like tenor player Frenchman Julien Alenda and Italian bassist Pasquale Votino. We’d all worked with Swedish-Syrian pianist Anders Olinder. Jams are where I met guitarist and now oud player Knud Stuwe and altoist Len Aruliah. Then I thought of the concept of a band of European musos based in Bristol. I count myself in with them as I’m Swiss on my mother’s side. Julien put me on to young Tony Williams-like Italian drummer Paolo Adamo, also new to Bristol six years or so ago.
I’d been writing music all along so needed an outlet. It reflected my life’s ups and downs: a 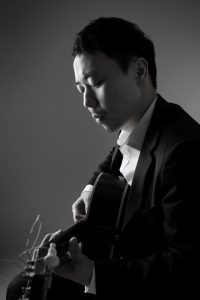 walking pilgrimage’s adventures, the birth of a daughter, feelings about Palestine and the Middle East I’d visited several times, and musically it had all my influences: Miles, Masekela, Gil Scott Heron, the freeform ecstasy of Coltrane, Sun Ra and Keith Tippett.
I met guitarist Sangyeon Park and singer-pianist Yunmi Kang in June in Bristol and we hit it off immediately. From South Korea but trained in Germany and the Netherlands, their jazz is gentle introspective and polished. We’ll create a band playing theirs and my pieces with a BEJE rhythm section of Federico Leonori on bass and Paolo Adamo.
The first tour is coming up in January 2019. And longer-term we have ambitions to create a new Korean-European hybrid jazz music telling something of the Korean story perhaps like I’ve done for Israel-Palestine, but it’s early days. In January it’ll be a straight-ahead jazz tour building our relationship first. We’ll make an album at the time.
hear some of their work:
www.youtube.com/watch?v=Ddfox9F1od8
madmimi.com/s/71dc4b
www.youtube.com/watch?v=bIDmuRfYL1w