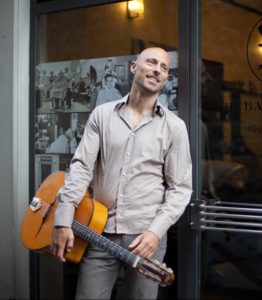 Although sinti guitarist Django Reinhardt is the main inspiration behind the trio, in his Modern Manouche Project, Dario Napoli looks to include more contemporary influences in his version of gypsy swing, introducing elements of more modern musical styles such as bebop, funk and modern jazz. The result is an unpredictable and exuberant sound, which steals from various musical eras leading you you through a rich and vibrant sonic experience, without ever totally abandoning the gypsy imprint of Django. Most songs are original compositions of Dario with a few reinterpretations of jazz or pop standards from different eras.

No stranger to some of the biggest music cities in North America, guitarist and composer Dario Napoli of Cortona, Italy is quickly making a name for himself in the world of gypsy jazz music.  His 2012 tour of the United States took Dario’s music to fans in cities such as Austin, Los Angeles, and New Orleans.  More recently he has performed at several well-known festivals throughout Italy, including Arezzo Summer Jazz, Trasimeno Blues and Raduno Mediterraneo Petralia, where he performed on stage with Stochelo Rosenberg.

Surprisingly to many, Dario’s career in music almost didn’t happen.  He started learning how to play guitar when he was eight-years-old only to quit after just a few weeks of instruction.  But his love for the instrument was renewed nearly three years later when Dario witnessed a performance by one of the world’s best guitarists.

“My brother brought me to an Eric Clapton concert,” Dario recounts.  “I remember being so affected I could barely sleep after.  I knew I was ready to pay the price to do all I could to learn, on a beat up 40-euro classical guitar, copying by ear all I could.”

And learn he did.  Dario has since gone on to great things, including performing at the Eddie Lang Jazz Fest playing alongside Sebastian Giniaux, Cloughtoberfest,  Tilburg Djangofest, Festival des Puces (Paris), Piracicaba Jazz Festival (Brasil), Pennabilli Django Festival, as well as being invited to open the popular Django in June festival in Northampton, Massachusetts.  That performance gave him the opportunity to share the stage with artists such as Tcha Limberger, Adrien Moignard, Gonzalo Bergara, and Robin Nolan.  The world of gypsy jazz has most definitely welcomed Dario with open arms…and he has enjoyed every moment of it.

“What I love about the gypsy jazz style and it’s scene is how honest it is,” Dario explains.  “Your reputation and respect is earned by how you perform live. You can’t BS that crowd.  There are no shortcuts or special effects.  You either can play or you can’t and it’s raw and sincere.  You could be a lawyer or a janitor but, if you have the skill, you will be respected and accepted.”

Dario also knows his way around the recording studio, having released two original albums.  His first album, “Gypsy Bop”, was produced in 2011 by Drycastle Records.  Dario’s second album, “Make It A Sunny Day”, was released in 2013 and included guest appearances from prestigious artists such as Jacopo Martini, Maurizio Geri, Tolga During, and Augusto Creni.  In fact, “Make It A Sunny Day” was created with the assistance of a grassroots crowd funding campaign led by Dario.

“The great thing about working with those caliber people is to see how careful they are with detail,” Dario remembers fondly.  “They have a sound in mind and they don’t stop trying until they reach that sound or effect.  Working with Wawau Adler recently was a great highlight.  He is one of the greatest gypsy players of our time and, with him, I learned the value of taking time to try to create your own language and try to find your voice.”

Aside from performing and composing, Dario also instructs artists on how to play the guitar.  His instructional materials can be found on his website, www.DarioNapoli.com, and have been featured in Gypsy Jazz Secrets Magazine.

In collaboration with Maurizio Geri, he was co-author of Italy’s first instructional book/dvd on gypsy jazz from Italy, “La Chitarra Jazz Manouche”, sold by Dario in the many Masterclasses held not only in Italy, but also Netherlands, Ireland, Brasil, Colombia and Israel.