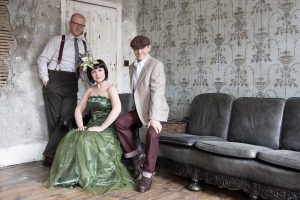 Blues, Ragtime, Hot Jazz, Songs and Dances from long ago.
Working backwards from the 1930s, the FB Pocket Orchestra explores repertoire that formed the embryo of what is now known as popular music.
The members originally began playing together simply as an exercise in exploring heritage repertoire – taking on a few informal performances and recording dates as schedules allowed.
The FBPO became an ‘official’ project in the spring of 2012 and released its first album in October. The aims of the orchestra are to present a contemporary slant on popular acoustic music from the late 19th and early 20th Centuries.
‘Atmospheric, yet vibrant, this charming collection of songs will make you wish you had been born some 100 years ago. The style, glamour and ‘fabulousness’ of this era is captured beautifully on the album.’  Jazz FM review October 1st 2012

Recent performances of note include: The Royal Albert Hall, Canterbury Festival, Norwich and Norfolk Festival, The Southbank Centre, Cheltenham Literary Festival, Chalke Valley History Festival, Sandringham House, Blenheim Palace and extensive work with The National Trust.The FBPO create a charming sound that resonates with a modern audience and celebrates some of the key musical attributes of the past.