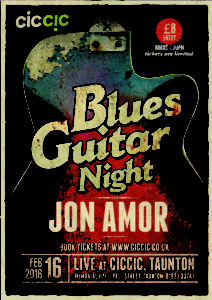 Tickets £9/8 online. £10/9 on the door.
Jon Amor rose to prominence on the British blues circuit in the early nineties as a guitarist in the trail-blazing blues band from Wiltshire, THE HOAX. The band toured the UK, Europe and North America before disbanding in 1999 with four successful albums and a string of awards to their name.
As frontman with his own band “AMOR”, Jon then established himself as a talented singer and songwriter in his own right, releasing two influential albums that gave British blues rock a much-needed shot in the arm. He followed this up with two solo albums, featuring a guest appearance from the legendary Robert Plant.

He then formed JON AMOR BLUES GROUP, a high energy, dynamic blues rock outfit that toured Europe extensively and produced two highly acclaimed studio albums between 2011 and 2013.
Jon continues to tour extensively around the UK and Europe and is gearing up for a worldwide release of his brand new studio album.
Photo by Dan Watkiss