Les Carter (Carter USM and Ferocious Dog)
Les is best known for his work in “Carter The Unstoppable Sex Machine” in the early 90s, 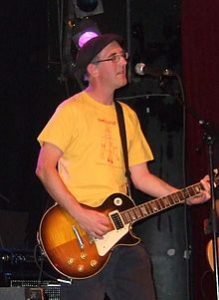 and these days for providing guitar for folk-punk kings “Ferocious Dog” as well as his long standing band “Abdoujaparov”. When Les is not on the road with said Dogs, he is on stage solo and acoustic! It´s a rare thing to see such a seasoned performer in such a small venue, performing such a stripped back set. Grab a ticket, get yourself a drink and get down the front! We will see you there!
http://www.carterusm.co.uk/
http://www.ferociousdog.co.uk/
Nick Parker
Come and see this man now, because we predict that in the not so distant future we may have to watch Nick from the back of the room; unable to wade through thousands of adoring fans! Nick is a firm favourite in the UK festival scene and is constantly on the road, entertaining audiences across the UK and mainland Europe. Like a fine cider he is well known and well loved in the West Country.

http://www.nick-parker.co.uk/
Jake Martin
Jake has spent the last 2 years touing his brand of angry folk punk practically non stop accross the UK, mainland Europe, America and Australia. Now he is back for another run with a brand new EP and a big bag of new songs! Those of you who caught his support slot with Gaz Brookfield in Taunton last year will know how good this lad is.
http://www.jakemartinmuzic.com/
B-Sydes
Ben has had a great year, with stand out performances including Gaz Brookfield support at 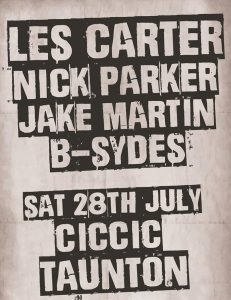 Bristol´s sold out Bierkeller, a slot at Farmer Phil´s Festival, and playing for Sheer Music in Devizes. Ben´s songs are as unique as they are well crafted. Make sure to come early and check him out!
http://www.b-sydes.co.uk/
This is an all ages show in conjunction with Fuelled By Cider and Safe Gigs for Women