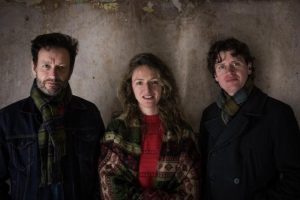 Tickets £8 on line – £10 on the door
Cons £5 – students/unwaged/income support
Rock of Eye’ –  a tailoring term where instinct is trusted over a scripted approach.
Rock of eye perform early European traditional music tied together with extended improvisation. On stage they create long flowing pieces, blurring the boundaries between written tunes and spontaneity – just as the name suggests; reanimating folk music in a way that is both new and familiar.
Based in Bristol, the group is made up of three of the most inventive instrumentalists in 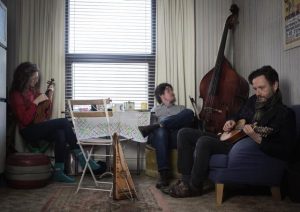 the UK – Alex Vann on mandolin and psaltery, Francesca Simmons on violin and musical saw and Ron Phelan on 5-string double bass.
Most recently they were awarded a bursary by the English Folk Dance and Song Society to explore English folk music, and they continue researching new material and performing across the UK.
“Rock of eye are Alex Vann (Spiro, Three Cane Whale) on mandolin Ron Phelan (Schmoozenbergs and many others) on double bass and Madame Česki (Paper Cinema, Sam Lee band) on violin. Drawn together through a desire to explore folk music of the British Isles and Europe through improvisation, this trio are creating their own architecture in this genre. Don´t expect a slow amble through English folk music. Prepare for an explosive and exhilarating ride from early Italian dance music to forgotten Welsh airs, and everything in-between.” Folk & Honey