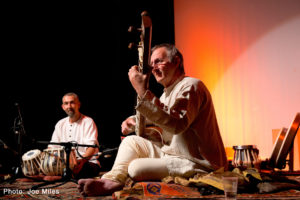 We are excited to have the wonderful Samswara here at CICCIC who will perform a special concert of classical Indian music with sitar and tabla.
Doors  7.30 pm -Start 8 pm
Tickets £8 online – £10 on the door
Concessions £5 (students, unwaged & supported income)

Samswara sitar & tabla duo – Jon Sterckx (tabla) and Ricky Romain (sitar) have been thrilling and entertaining audiences throughout the UK since 2001.
During this time they have developed a reputation amongst Indian music lovers nationally for their on stage rapport & spontaneous and playful musical dialogues.
The many positive responses from audiences highlight their engaging and dynamic performances that begin with slow, meditative melodies unfolding into complex exciting rhythmical interplay.
Samswara were performers at the National Celebration of British Asian Live Arts in 2008 and were voted ‘Best Group’ in the MTM South West & South Wales Asian & Ethnic Minorities Awards 2014.

Sam is the first beat of a taal, or Indian rhythmic cycle. It’s literal translation is ‘together’. It is around this beat that the musicians weave their virtuosic improvisations and intricate compositions, passing the music between them, with each Avartan, or cycle inspiring the next.
Swara are the notes of the Indian musical scale. The literal translation is ‘self shining forth’ – a strong feature of Indian music is of the performers bringing the music to life in the moment through spontaneous musical expression.
Samswara – together the self shines forth.

” . . .The brilliant sitar of Ricky Romain in duet with Jon Sterckx’s tabla wizardry was a first class example of musicians “playing off” each other, their evident joy never becoming indulgent, and never compromising the aims of the music. . . .” – Colin Sell, BBC Radio 4.
“…the near capacity crowd enjoyed an evening of spellbinding music, which the majority had never heard live before. The reaction of seemingly everyone present was overwhelmingly positive…a superbly atmospheric and fascinating evening’s entertainment which delighted everyone present.” – Tony Hayward – Ilminster Arts Centre.
“Your performances were truly mesmerising” – Esther White – University of Exeter, Organiser of Celebration Of British Asian Live Arts Concert 10.04.08
“…a mesmerising Sitar and Tabla Performance by Ricky Romain and Jon Sterckx.” – Plymouth South Asian Society AGM performance 2007.
For more Samswara information, music & videos, visit: http://www.jonsterckx.co.uk/indian-music