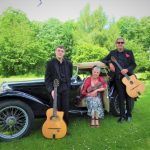 Tickets £9 Online – On the door £10
Cons £5 – student/unwaged/income support
Trio Anglais is a Reinhardt/Grappelli gypsy swing band, playing one of the most exciting and potent forms of European jazz, emulating the sound of 1930s Paris: with Ali Foyle, violin, Dave Lunniss and Darren Hodge, Guitars.
And the Trio will be joined by special guest, Andy Crowdy on bass.


Ali Foyle is a professional violinist previously teaching and performing mostly classical music. She brings a lyrical and swinging style to the band that sits perfectly with hot club jazz.
Darren Hodge.  Darren has been playing the music of Django Reinhardt with Trio Anglais for some time now and is considered one of the best young guitarists in the country.
Dave Lunniss has been an integral part of the UK & European gypsy jazz scene for many years. 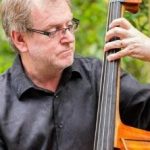 Trio Anglais will be joined by the double bassist, Andy Crowdy, who is a well-known and highly rated bass player on the UK jazz scene. A regular member of the very successful Moscow Drug Club and the Creole Clarinets, he is sought after by some of Europe’s most renowned Gypsy Swing Guitarists, such as Lolo Meer and Angelo Debarre. His incredible sense of rhythm and drive combines with a lyrical musicality, coming to the fore in his solos.

To hear some of their music click on the following link and hear some of there recent work:
https://www.facebook.com/trioanglais
It promises to be a fantastic evening as it always is with this band!