Longing, Belonging and Balfour: A Musical Retelling of the 1917 Declaration.

‘Longing Belonging and Balfour’: a musical retelling of the 1917 Balfour Declaration story.

Tickets available at £9 – concessions £8. (Retired,unwaged & students)
Tickets will be available on the door at £10.
Doors open 7.30pm – Show starts at 8pm approx. 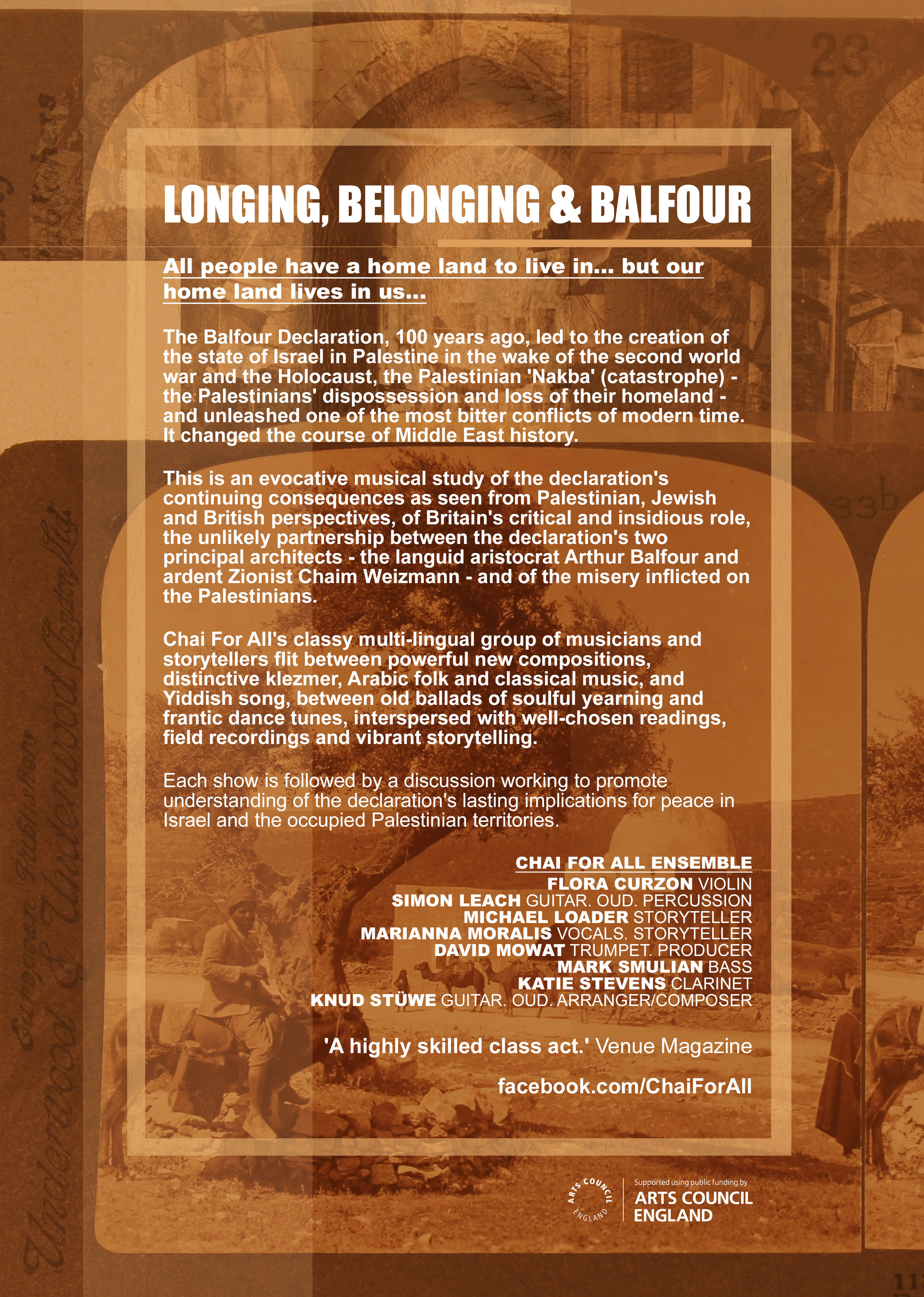 We’d like to invite you to ‘Longing Belonging and Balfour’: a retelling of the 1917 Balfour Declaration story. This two-part music and spoken word performance by the Chai For All Ensemble weaves together powerful new composition and musical tradition: Jazz, Klezmer, Arabic, Ottoman and Yiddish song.
It draws on the Russian scientist and Zionist Chaim Weizmann’s account of how in 1917 he won the heart of Arthur Balfour, misty-eyed imperialist, and extracted a promise from him to find a homeland for the Jews in British-held Palestine.
But what of the people already rooted there, the Palestinian Arabs? Not consulted, their fate would unfold more fully in the catastrophe of 1948. Their story will be told too.

“Chai for All” is a classy multi-lingual group of musicians and storytellers. They flit between powerful new compositions using klezmer, Arabic folk & classical music, and Yiddish song. Old ballads of soulful lament and frantic dance tunes are interspersed with well-chosen readings, field recordings and vibrant storytelling.
“Longing, Belonging & Balfour” is an evocative musical study of the Balfour Declaration of 1917 and it’s continuing consequences for the Middle East, seen from Palestinian, Jewish and British perspectives. We highlight Britain’s critical and insidious role, and the unlikely partnership between the declaration’s two principal architects – the languid aristocrat Arthur Balfour and the ardent Zionist Chaim Weizmann – and the misery inflicted on the Palestinians. Looking askance at the human story, the land tells its own tale.
An intriguing musical journey which CICCIC is proud to promote.
Funded via Arts Council England and crowdfunding.