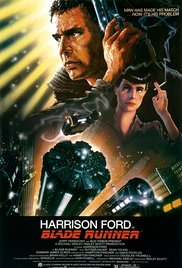 Ridley Scott’s seminal sci-fi movie that set the bar for the genre is due a sequel “Blade Runner 2049” scheduled for release on 6th October 2017. Hence our showing this classic from 1982. The film was released with a voice over by Harrisson Ford after test audiences found it hard to distinguish Human from Replicant and the film was later released as a Directors Cut with that removed and small scenes restored. The debate over whether Deckard was a replicant has raged since the films release!
Storyline:
In the futuristic year of 2019, Los Angeles has become a dark and depressing metropolis, filled with urban decay. Rick Deckard, an ex-cop, an ex “Blade Runner”. Blade runners are people assigned to assassinate “replicants”. The replicants are androids that look like real human beings. When six replicants commit a bloody mutiny on an Off World colony, they return to earth to find their maker. Deckard is called out of retirement to track down the androids and eliminate them.