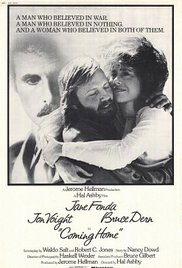 It took the American film industry many years to make films about the war in Vietnam, apart from patriotic fare such as The Green Berrets. Released in same year as The Deer Hunter it looked at the conflict from a personal point of view and the stresses people experienced, not only by those who fought, but also those back home. Both lead actors won Oscars for their performances.
Storyline:
Sally Bender is the wife of a Captain in the United States Marine Corps. He is sent over to Vietnam, and Sally is alone. With nothing else to do, she decides to volunteer at a local veteran’s hospital, where she meets Luke, who went to high school with Sally. Luke was wounded and is paralyzed and confined to a wheelchair. When Sally begins to fall in love with Luke, she has to make a crucial decision about her life.