Over the Wall Productions presents: OVER THE WALL PICKING APPLES 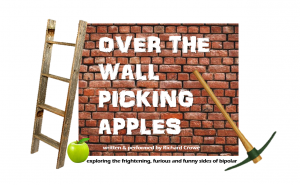 Doors Open 7.30pm – Show starts 8pm
Tickets £8 on line – £5 cons/student/unwaged/supported income & mental health service users.
A one man show about men, mental health and identity
by Richard Crowe
So, there are these three brothers: Mind Your Own Business, Shut Up and Manners.They’re out scrumping. Taking it in turns to climb over a wall, climb up a tree and pinch as many apples as they can.As it happens it’s Manners’ turn in the orchard when plod arrives on the scene.
Ello, ‘ello, ‘ello,’ he says. ‘I don’t like the look of this,’ and he fixes the two brothers with his beady eye. ‘What are your names?’
‘Mind Your Own Business,’ answers one. ‘Shut Up,’ replies the other.
‘Where’s your manners?!’ bellows Plod, incandescent.
To which, as one, the brothers reply: ‘He’s over the wall picking apples’
It’s not the best joke in the world. But that’s not the point. To me, as a boy of seven or eight years old, it told me something. It told me: boys-climb-trees.
But I could hardly climb over the garden fence, let alone up a tree.
So if I wasn’t a boy…what was I?


Richard Crowe is probably best known in the south west for coordinating the cultural programme around the London 2012 Olympic and Paralympic sailing events in Weymouth and Portland. And, locally, as past artistic director of Bridgwater Arts Centre, Arts officer for Taunton Deane and  a past chair of The Brewhouse Theatre and Arts Centre.
However, in another life, he started his career in the theatre as a writer and actor. And it’s to the theatre he returns to tell an extraordinary story of self- discovery.
It all started in 2014 when Richard’s laptop – on which he was trying to complete a novel – started to sing choral music. It wasn’t long before the washing machine then the fish tank decided to join in.
Quite unlike the depressive episodes Richard had previously experienced, what followed was a complete ‘breakdown’: days wading through treacle; nights battling demons; months wanting to go to sleep at night and not wake up in the morning.
Over The Wall Picking Apples is the story of Richard’s response to all this: his admission into the mental health service, medication (the highs…the lows) and the therapy that’s helping him put his life back together.
Expect an emotional roller-coaster as Richard squares-up to mental health no holds barred, placing it under the spotlight to face the frightening, the furious and the funny sides of mad.