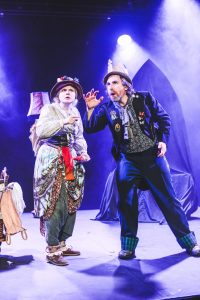 Deep in the vaults of an ancient priory a hideous creature awakens. A deadly cockatrice is born! Bold knights flee in terror… Can a humble nun defeat the beast? Multi-Award-Winning Mumblecrust Theatre present two muddle-headed storytellers, an obscure British legend, breathtaking puppetry and spine-tingling live music in this dark and winding fable for monster-lovers young and old. Winners: “Best Newcomer to Brighton Fringe” and “Best of Brighton Fringe: Children and Families Award” 2017. ***** – “a genuine work of art” – The Voice. ***** – “a fascinating world of intrigue, mystique and fantasy” – Primary Times
Mumblecrust Theatre is an award-winning theatre company based in the South West of England. Co-Artis- tic Directors Katie Underhay and Anthony Burbridge came together to fill a niche in children’s theatre, where slightly older children often get left out. From this collaboration, The Tale of the Cockatrice was born.
The pair have collaborated on a number of other projects, including: satirical music video Tawdry Child, Pinecone Penguin’s King Kong the Musical, puppeteering the Mermaid in Luc Mollinger’s creature feature short The Mermaid of Mevagissey and co-directing (and creating puppets for) new musical Heartwood.
“Cleverly choreographed with wit and humour to capture the imagination and enslave the senses.”
– Jemma Mcintyre (Edinburgh Fringe)
“Full of character and whimsy, the range of imaginatively-created puppets and lovely
harmony-filled songs accompanying the performance were thoroughly captivating and entertaining. Our group (ranging from 7yrs to 66) loved it.” – Clare Littlemore (Brighton Fringe)
“A great performance, highly original. My 8 year old boy adored it and has been re-enacting it ever since!”
– Natasha Pester (Theatre Shop, Clevedon)
We are delighted to bring this fantastic show to Trull and hope you will support this fabulous production!