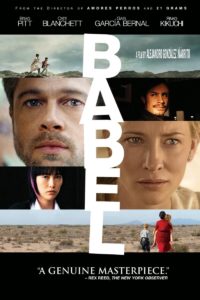 Neighbourhood Cinema movie night at CICCIC with “Babel” 7.00pm.
Shown as park of a season of films by the Mexican director Alejandro G. Iñárritu this film from 2006 was my film of the year! Beautifully scored the film looks at three conected stories that unfold in North Africa, North America and Japan.
Storyline:
In Morocco, a shepherd is given a powerful rifle which he gives to his sons to protect his herd of goats against jackals attack. The younger decides to test the weapon’s range of 3 km and shoots an American woman in bus. She and her husband are trying to reconcile their marriage through this through vacation in Morocco. Due to the incident, in San Diego their Mexican maid travels to Mexico with their children for the marriage of her son. Meanwhile in Tokyo, the police tries to contact the former owner of the rifle, whilst his daughter who is reeling from the loss of her mother,  misunderstands the reason of the investigation.