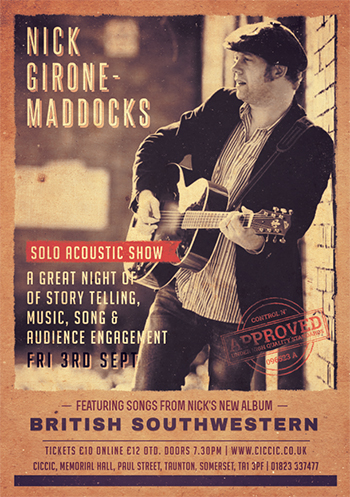 It’s been a busy time musically for local performer Nick Girone-Maddocks, with a new album ‘British Southwestern’ released at the end of 2020, and a remix of his 2004 debut ‘Friday Night Star’ being completed just recently.

His song writing back-catalogue, be it solo or with the seminal UK acoustic group Thunderbridge Bluegrass Band, spreads subject matter far and wide, humorous and deep-thinking too. His styles are roots-based, and ‘British Southwestern’ digs deep into his relationship with America and his love of American music.

Always a good story teller, Nick’s solo acoustic show is an engaging affair, with a relaxed performance enabling everyone involved to feel a part of. Like most performers, Nick has endured a year-long hiatus from live shows, and is thrilled to be coming back to this fabulous venue to present his new album, and some familiar favourites.

“Nick is stepping it up from his usual solo music with some well executed music sets, while keeping true to himself. Delivering his storytelling talents in a way that reflects the end of an era and the birth or a new one. He really is a ‘must see live’ performer and is music that reaches to all of us.” –  CICCIC director and programmer Andrew Knutt.