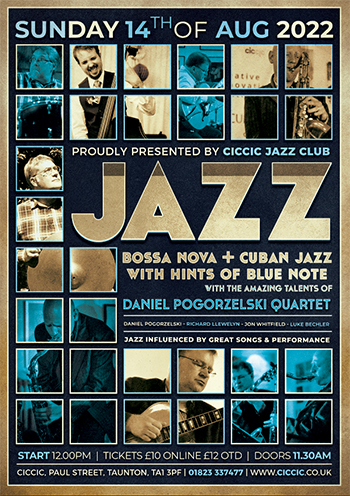 Daniel Pogorzelski
Tenor and soprano saxophone player. Professional woodwind instrument technician, and jazz maniac as his friends called him. In truth, he can honestly admit to fall in love with jazz many years ago. In the past being involved with some fusion jazz projects and avanguard experiments. Nowadays he plays with various projects including Cuban jazz, big bands, New Orlean influenced street music (LittleBigHorns), jazz fusion projects and enjoying very exciting project with his DPQ quartet/quintet.

John Whitefield
Jon is a drummer and educator from Bolton, Lancashire now living in the South West. After graduating in Jazz at Leeds College of Music Jon worked throughout Europe and the USA and has played and recorded with, amongst others, Jim Mullen, Alan Barnes, Peter King and Julia Fordham.

Luke Bechler
Luke is a New Zealand born bass player who took up the bass guitar at age 13 by chance when copying a friend who was signing up for lessons. At the time Luke did not know what a bass was but soon fell in love with the instrument. After developing a passion for jazz music, Luke went on to study jazz upright bass at the Christchurch Jazz School. Since moving to the UK Luke has become a household name on the Somerset scene playing with many of Somerset’s finest.

Bob Cronin
An American, born in New York City and has been living in the United Kingdom for over 30 years. Bob has been playing jazz since he was 15 years old leading him to tour with the US Navy Band before attending the Berklee College of Music in Boston. Since arriving in England, Bob has played with various small and big bands. Most recently. the Mike Westbrook Big Band.