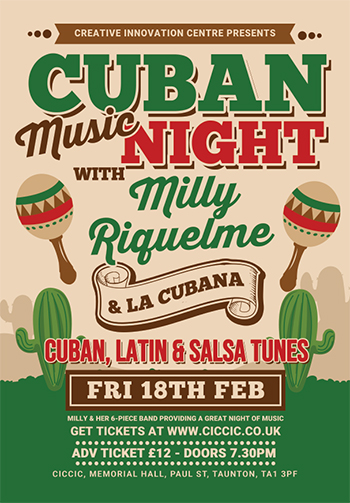 Join us for an amazing and energetic night of Cuban music; often considered one of the richest and most influential regional music in the world;  and with the great Milly Riquelme and her 6-piece band with percussion, drums, double bass, guitar and sax playing a mix of traditional Cuban tunes, Latin and Salsa, they’ll bring the passion and fire of a Havana nightclub to town….

Milly Riquelme (Piano and vocals) was born in Santiago de Cuba, she learned to play the piano at the age of 3 with her beloved grandmother and a renamed Music Teacher. Her appearance in a talent TV Show at the age of 4 took her to an amazing Musical journey. 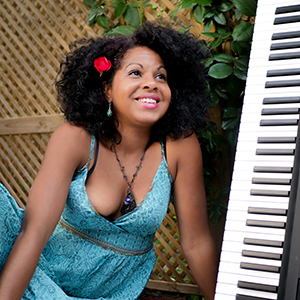 Graduated of Musicology with Honors from the Higher Institute of Arts (ISA) in Havana sense 2006, Milly has been collaborated as a musical director and pianist with Cuban Salsa and Latin bands in Havana. In 2007 join as a Pianist the band Conexion Salsera, with who recorded and album and collaborated with other well-known other Cuban Musicians, like Nicolas Sirgado and Mayito Ribera, pillars of the popular Cuban and Latin jazz in Cuba.

Milly went on tour to Asia during 2007-2008 as a pianist developing a special taste for jazz. Lived in England sense 2009, collaborating with Tom Toomey, lead guitarist of The Zombies and recorded and wrote the notes to the album Gambia.

Milly also is a passionate musician and have performed extensively as a solo artist: pianist/singer, and with her Latin band La Cubana in several events, also in collaboration with other live musicians in London, and internationally, like the violinist Omar Puente. Milly has released her first album Nostalgia Cubana which is a compilation of Cuban and international folk songs with her own style.