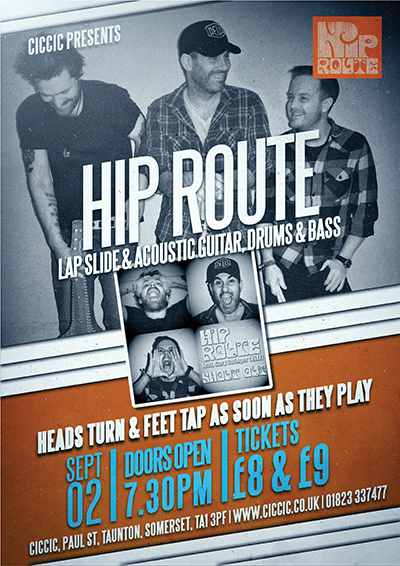 Saturday 2nd September – Doors open 7:30pm. Tickets £9 Online – On the door £10
Hip Route are a 3 piece roots band from Wiltshire UK and part of The UK Roots Movement.
Using the old working ethic of playing live as much as possible, Hip Route make full use of Weissenborn, lap slide, acoustic and electric guitars, drums and bass to create a bigger sound than you’d think. So far Hip Route have shared a stage with Jason Mraz, Ben Howard, Newton Faulkner, The Hoosiers, Alabama 3, Them Is Me, StringerBessant, Ben Ottewell, Toploader, James Morrison, Watermelon Slim, Martin Harley Band and Rurrari Joseph among others.
‘The word cool is often bandied about carelessly these days and doesn’t sound that well, cool anymore but if there was ever a band that could put the cool back into cool then it would be have to be Hip Route. These guys are effortlessly cool, hip and funky- the moment Jim Blair strikes up the old slide guitar , the heads turn, the feet tap and then the rest of the band storm headfirst into groove.’ – Cleverhead Promotions, Bristol
‘Hip Route have a universal sound that appeals to all lovers of real music’ – Blues Matters Magazine