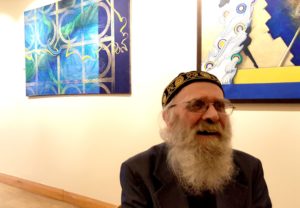 These few, rather disjointed paragraphs, are not intended to be a comprehensive biography of Jack Coulthard’s life, nor a particularly penetrating enquiry into the meanings, complexities or significance of his many works. I leave those tasks to the army, which I am sure is already gathering at the gate, of academics and PhD students, ready to tell us what Jack meant.
Here, I am eulogizing about a man. Not any man, but one of considerable cultural significance, written, rather oddly, as if he might read it himself. So don’t expect the considered prose of the obituarist, nor a Socratic apology.
No, more Jack’s style I hope, arrivederci baby and amen!
If you know Jack’s work and it is biographical details and paintings you want, or maybe you’ve never heard of him and are curious to know what I’m banging on about go to http://www.jackcoulthard.co.uk where there is some good material including the excellent interviews with Viv Grant. If you don’t know Jack’s work I envy you that rush when you suddenly realize what you have stumbled upon. 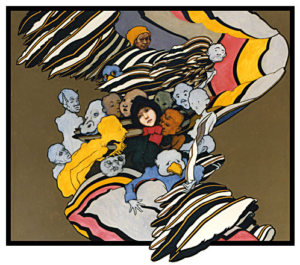 Jack’s explanations for his paintings are, at best, simply descriptions of what you see or maybe the occasional cryptic clue. Here’s one, Jack says of this painting, ‘An Angel Even,’ 1990, reproduced right.
Homage to Marcel Duchamp, at least he made us THINK. Here the Angel Bride is beset by Rembrandt and some demon bachelors, however, she knows the difference between life and art.
Jack was a consummate obscurest, using ambiguity not only to throw off the most well-meaning questioner, but also to quiet with effected candour, even the most informed of enquiries. In the quote above he doesn’t even begin to explain what these references mean. ‘Rembrandt,’ what’s he doing there? ‘Bachelors, she knows the difference between life and art?’ Having read this we return to the painting with another layer of narrative to thwart our quest for explanation.
And of course, that is the point. These paintings were never meant to be decoded as one might the Rosetta stone. They are paradoxes, sometimes even contradictory. No, to get anywhere with these images one has to accept that they are as much about Coulthard’s unique vision of the world as they are about the references he uses. Only the most pedantic of viewers believes that unravelling the references in these works will lead to enlightenment, it won’t. But what will?
Coulthard gives us the clue himself. In one of the interviews he gave to Viv Grant, when she asked him why someone should buy one of his paintings. ‘You can look at them for a very, very long time,’ he says. At first that sounds rather throw away but upon reflection I think he means just that. He put a huge amount into these works and it takes an awful lot of looking to get beyond their breathtaking power to even begin to start reading them.
In an age that craves instant gratification and accepts the exhibits in Tate Modern and the Turner Prize as the best current Art, it is a courageous man to fly in the face of such elitist, cultural bullying. But, that is exactly what Jack Coulthard did with such commitment, intelligence and strength that it humbles all but the most arrogant amongst us. But we aren’t short of them are we?
Take the entire contents of Tate Modern and pile them up in a heap on some waste ground. Scatter a few Coulthard paintings around and then ask people to take one thing from the heap to keep. Exclude precious metal scavengers or the homeless looking for boxes to live in. Now what do you think would happen? Do people grab some bits of broken glass, a pile of stones or bits of driftwood? Are we all philistines? Is this another referendum after which we are all told by Sir Nicholas Serota or Charles Saatchi that we are stupid and do not know what’s good for us?
Despite an apparent willingness to talk earnestly about every aspect of his work, Coulthard could be sesquipedalian. In fact I think he deliberately shrank back behind clouds of obfuscation and myth of his own making. This is not to say that he was concerned that his work needed any further layers of obscurity to give it value, quite the opposite, it never did and he knew it. He also knew that if his paintings could be easily explained in words, why bother producing them at all, after all he was quite a good poet too? (Ezra Pound later)
No, in Coulthard’s hands the images he produced go way beyond the simply figurative made extraordinary by his imagination and the raw talent that puts him up there with the greats. Yes, I am talking Piero della Francesca, the Bosch boys, Vermeer and of course Bruegel. Put Coulthard’s Memorial II next to Bruegal’s Tower of Babel. See what I mean? And what would they have talked about, Jack and Pieter? I can tell you. Bruegel would have wanted to know just how Coulthard made those brush strokes invisible. Yes how the hell did he do that and why? Because unlike most art movements he did not want anything like messy paint or technique to get in the way of narrative meaning.
In most current art there is neither meaning, nor any apology for its absence either. Why should there be when meaninglessness, or perhaps very trite meanings, is the current vogue? Think Turner Prize, a light going on and off, cotton buds, fish skins and train sets. So, far from expectations of ground breaking Art being conceived by the YBA’s and their acolytes it turns out that the truly revolutionary stuff was being produced in a garden shed in Somerset. The YBA’s are actually the impotent lackeys of the right wing establishment producing the bit coin tokens to be traded around the world of banking and hedge funds. No wonder the works have no meaning, what meaning do you want in toy town money? But of course, in this climate, to appreciate what Coulthard has been doing would have been an anathema to what is now, strangely, the establishment.
Up until now I have carefully avoided direct references to too many events in Jack’s life, knowing that these facts are easily available elsewhere. Although I wanted this piece to be about his work, there is one event that merits mention. The year he spent in Tarquinia, Italy, with his wife Barbara in the sixties. More than anything else this experience profoundly influenced his work. Look at almost any painting and you will see an Italian influence. Apart from the artists, Italian Renaissance architecture, (Brunalesqui and Sienna) that occur again and again, there is one Italian reference that stands out, Ezra Pound. 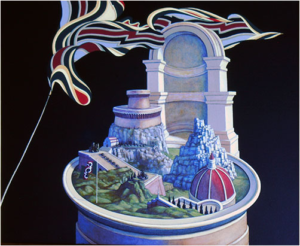 Although ‘dark Satanic Mills,’ (Blake) do appear in Jack’s landscapes they are usually tempered by dramatic Mediterranean, bolder-strewn landscapes, often ruined classical temples or abandoned buildings, all that’s left of civilisation, await a final destruction that never comes, this is it, the end of all we know. We are quite often in utopian places of great beauty that are also contained within visible boundaries as if the world we see is carefully packaged and sent off into space like the garden in ‘Silent Running.’ (The world on a plate) (shown right).
And so to Pound. Although lucky not to have been executed at the end of the Second World War as a fascist collaborator for his support of Franco Mussolini, Pound went on to become one of the most influential poets of the twentieth century. Without Pound there would be no TS Eliot’s ‘The Wasteland’ or arguably Bob Dylan.
I quote the Dylan lyrics of Desolation Row: “Ezra Pound and T S Eliot are fighting in the Captain’s tower,” he sings, the Captain presumably Whitman, the tower maybe belonging to Yeats.
I use this only to show how influential Pound was on twentieth century creative thinking. Jack paints Pound several times and Dylan mentions him and I think they do this for the same basic reason. The Cantos of Ezra Pound is a long, incomplete poem in 116 sections, each of which is a canto. The poems are widely considered to present almost insurmountable difficulties to readers of all but the most powerful of intellects. Rather like a Coulthard painting or a complex Dylan song. Pound gave them the permission they needed to seek out references already existing in Art and literature to create entirely new ways of seeing people and the world, of creating a new reality. Dylan gets a Nobel prize.
‘I guess the definition of a lunatic is a man surrounded by them.’ Ezra Pound.
If you want to begin the journey to enter Jack’s world here are a few names that might help, DH Lawrence (Italy); Rosa Luxemburg (Julia); Tom Petty; WB Yeats (poems); Kurosawa (Samurai); Vermeer; Euclid, Nicholas Roerich (Le Sauce du printemps); Moritaten; Justin Williamson; Kamikaze; Han-shan and of course Confucius.
Otherwise just stand in front of these pieces of extraordinary Art.
In the end there is yet a final paradox. For someone who sought only recognition for his work through exhibition and was, despite bravado, a rather reticent man, he attracted a coterie of friends and admirers who, even after quite brief acquaintance, loved him. 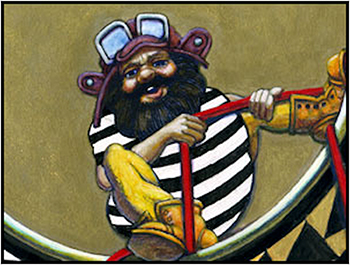 The Master of Cold Mountain

The Master of Cold Mountain
Where’s the trail to Cold Mountain?
There’s no clear way.
Ice, in summer, is still frozen.
Bright sun shines through thick fog.
You won’t get there following me.
Your heart and mine are not the same.
If your heart was like mine,
You’d have made it, and be there!
Han-shan, Poet.
Late eighth century China
Jack Gardner
December 2016
The opinions expressed in this article are exclusively those of the author Jack Gardner, who was for many years, Head of School of Communication Arts at Somerset College and latterly visiting lecturer at Bath Spa University College. He has written two books, ‘Words are not things,’ and ‘I wish I was the person I’m pretending to be.’ (Both published by Foulsham). His new book, ‘Jotter’ will be published in the spring. He lives in Bath.
Email jackrobertgardner@gmail.com