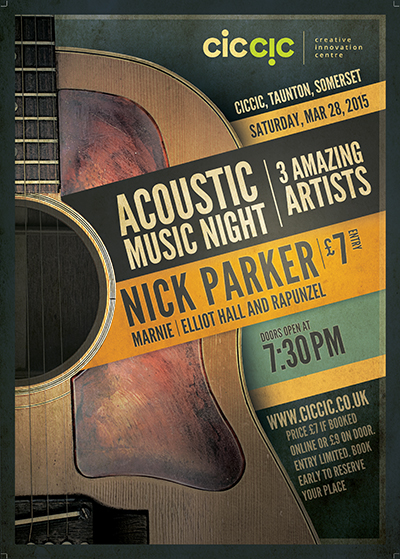 Tickets £7 online or £9 on the door. Concessions for students and over 65′s £6 online or £8 on the door.
This amazing line-up of acoustic songwriters, guitarists and singers bring the whole spectrum of the acoustic music to life in Taunton on Saturday March 28th 2015 and an excellent price for hearing from 3 amazing and well-seasoned artists from a range of genres. We are very excited to have

Glastonbury (UK) based Nick Parker was 13 when he first picked up a guitar and tried to string together a few chords. By 14 he had put down the guitar and picked up the mandolin. Not least of all because he wanted to be in his brother, Ant’s band and they needed a mandolin player.
The first few gigs came and went, under the name ‘The Mandolin Brothers’ (genius) before they changed their name to ‘Why?’ (equally genius) and they spent the next 10 years bouncing around on stages at hundreds of venues around the UK and Europe, reeling out their folk/rock/skiffle (latterly known as friffle) sillyness to sweaty teens and twentysomethings. 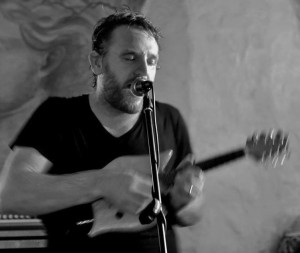 In February 1998 Nick finally put down his eight string and picked up a six (mainly because his fingers had gotten too fat for the intricacies of a mandolin) and started guitar band ‘Tobermory’.
Now under the name of ‘Nick Parker’, Nick has recorded his first solo album. Produced and engineered by former band mate Luke Stidson, the 12 track album ‘The King of False Alarms’ was recorded on location in a quiet cottage in North Devon during the terribly sunny June of 2010.
Playing his tongue-firmly-in-cheek folky/country/straggly songs, Nick’s solo live shows are as intimate and light-hearted as they are passionate and downright sweaty.
His second album Angry Pork and the Occasional Bird is due out in the summer of 2014 on Tonetoaster Records throughout Europe.

This Devon based Duo have a magic that brings a totally fresh, unique & vibrant sound with oodles of rhythmic loveliness. Their brand new Original songs are filled with passion, energy & soul & are often left lingering in the head.
Formed in May 2005 ‘Marnie’ has gone from strength to strength building up a name for herself on the local scene and, well, all over really. From Ireland to Germany, Cornwall to Norfolk and lots in between!
Marnie’s voice sounds like a little bit of Alanis, a little bit of The Cranberries, a little bit of K.T. Tunstall and a whole load of Marnie!
Her voice makes the hairs on the back of your neck stand up as she displays an impressive vocal range, from a soft and heartfelt delivery to a powerful belting technique. 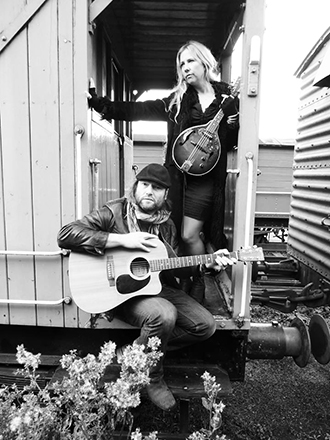 Elliot Hall has long been known in Bristol and surrounding areas for his sincere, emotional songwriting, raw, earnest performances and Dylanesque harmonica playing. He won the Viper songwriting competition in 2011 beating hundreds of hopefuls from around the South-West, and has released two albums – Sonnets And Singers and Adults Are Stupid – both to critical acclaim.
Now Elliot has teamed up with Rapunzel; a blues and country music singer with a long history of performing in various bands including rockabilly trio ‘Betty and the Page’ with Western Star Records. Together they enhance each others songs, with tightly written harmonies and musical acompaniment on each of their heartwrenching ballads, honest accounts of modern life, as well as nostalgic glimpses at days gone by.
Performing mainly original songs on guitars, mandolin, harmonica, percussion and male/female harmonies, Elliot and Rapunzel are gaining a reputation for their all-in-black, emotional performances, Elliot’s black cap and harmonica brace, and Rapunzel’s mane of golden hair.
Elliot Hall and Rapunzel have been compared with The Civil Wars, Harry Nillson, Gram Parsons and Emmylou Harris, The Handsome Family, John Prine, Leonard Cohen, Bob Dylan, Joan Baez and Loudon and Martha Wainwright.
“Between them, Elliot and Rapunzel take the smoky-room, rare-steak, bourbon-laced sound of his voice and weave in the softer, country-edged sound of hers to concoct a powerful brew – one you’ll want to taste again and again. In fact, when you listen to this music be ready for its essence to linger in your head for days.” – Tim Carroll, Folkwords
“A rough, gruff and tumble voice that pulls away at lyrics this good is the kind of daydream we need in England to reignite a spark for credible new songwriters. Fans of folk, poetry and rock ‘n’ roll should pay attention” – Alex lee thomspon, music journalist, NME london