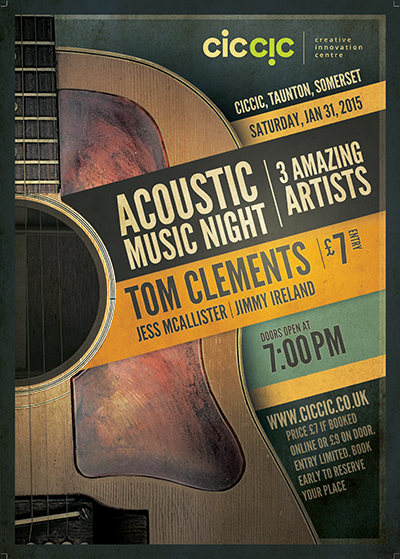 This amazing line-up of acoustic songwriters, guitarists and singers bring the whole spectrum of the acoustic music to life in Taunton on Saturday Jan 31st and an excellent price for hearing from 3 up coming and well-seasoned artists from a range of genres. We are very excited to have

In 2011 Tom gave up his full time job due to demand regarding solo gig bookings. Thankfully this has continued to grow. In the last 3 years he has performed a total of 450 gigs from Bristol to Bournemouth, Oxford to Southampton. Pubs, Clubs & Festivals. 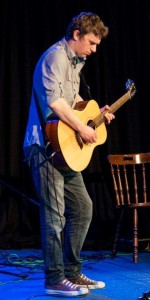 In 2012 Tom reached the quarter finals in the Dorset Music Awards, Semi-finals of BMTH unplugged and runner up in best male solo act of the Salisbury Music Awards and performed a total of 145 gigs that year.
In 2013 he independently released his self-titled album on iTunes, Amazon and Spotify and performed a total of 166 gigs in total.
Earlier this year Tom was contacted for some support slots for musicians that have very impressive CV’s of their own.

Whilst the writing and recording process continues for his second album, Tom was lucky enough to have Scott McKeon (one of his favourite guitarist’s) play on one of his new tracks. Scott has worked with Tom Jones, Lana Del Ray and other well know acts.


In August this year Tom released a 5 track live EP, mastered by Pete Maher (U2, Katy Perry, Beady Eye) recorded at The David Hall during the Petherton Folk Festival and  in September 2014 he was endorsed by Juicebox Amplification & Instruments and I also became the demo guitarist for Crimson Custom guitars. (Robert Fripp is one of their clients)

The music of Jess McAllister is wholesome, passionate and free-spirited. Developed naturally from the touchstones of modern folk, her songwriting has grown into an enchanting blend of sound, informed in equal measure by the spontaneity of live performance and an imaginative outlook on life.
Swirling with musical inspiration from a young age, Jess played the pub folk circuit in her home town Plymouth before performing and writing with a reggae band during her time at Exeter University. Leaving after three years she took a bold step forward, embracing two lifelong journeys which seemed destined to run in parallel: parenthood, and a solo music career.
Following the birth of her son, Alfred, Jess immersed herself in her songwriting with an enriched understanding of the human heart. Playing small, intimate gigs around Devon she added a tangible tenderness to her honey-dipped vocals and an uproarious fire to her foot-stomping acoustics, guiding captive audiences from raucous appreciation to spellbound silence.
For her E.P, songs grown from sensual piano composition and delicate vocal harmonies are woven with the gathered talents of her musical friends; Cello (Dury Loveridge), double bass (Damien Scarr), violin (John Matthias and Elizabeth Westcott), mandolin (Matt Norman) and drums (Tom Wright).

Jimmy took up playing the acoustic guitar at the age of fifteen in November 2009 because he really wanted to learn to play an instrument that accompanied his singing. He was already in a small school band in the city of Mandurah, Western Australia as lead vocals, singing songs mainly from AC/DC and some of our own material but it just didn’t feel quite right. He felt as though he could progress and do something other than classic rock.
Since moving back from Australia to the UK in 2011 Jimmy has taken his expertise to playing acoustic music and decided to perform as a solo artist. He finds it a lot easier as you don’t have to rely on the other members of a band and the only thing you need is yourself and a guitar.


An amazing line-up for CICCIC Acoustic Night so be sure to book your tickets in advance.