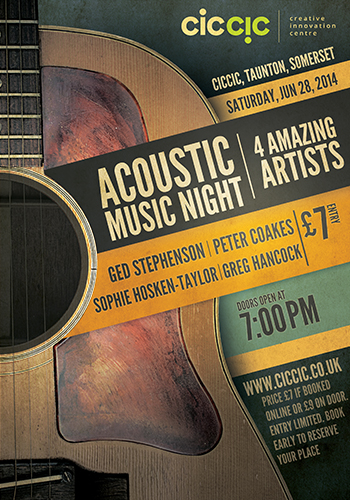 Yet another amazing line-up of acoustic songwriters, guitarists and singers bring the whole spectrum of the acoustic music to life in Taunton on Saturday June 28th an excellent price for hearing from 4 well-seasoned artists from a range of genres.
We are very excited to have

Greg Hancock got his first guitar when he was about 11 years old, and quickly found that he had little interest in playing other people’s songs and started making up his own straight away. He performed around local folk clubs in Essex and Hampshire in his early twenties but then started a life of travelling and living abroad, in Spain and then in Saudi Arabia and the UAE. composing but rarely performing. 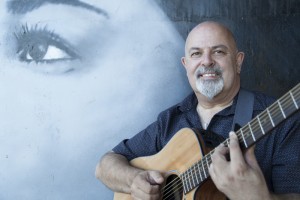 After many years overseas, Greg returned to Devon and quickly established himself on the local and regional music scene with frequent appearances at a wide variety of venues and festivals.
His songs are quirky and unusual with often unconventional themes and structures. Recent work has covered topics as diverse as Syria, baldness, parents and bedtime…. and there’s always time for a good old love-gone-weird song too!
Greg plays with a unique rhythmic finger picking style, evolved over many years from teenage attempts to sound like Nic Jones, Joni Mitchell and Jimmy Page… (“and I never really sounded like any of them…” he says).
Greg is currently working on a recording project with a jazz double bass player, a classical cellist and a traditional folk fiddler…should be an interesting sound!
Listen of one of our favourite sings by Greg Hancock below.

Learn how to get your song on itunes at ReverbNation.com 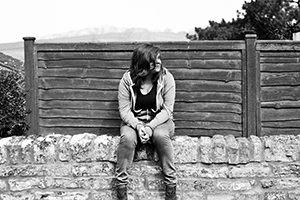 Sophie Hosken-Taylor is a singer songwriter hailing from the South West of England. Whilst having been performing on and off for the past four years, Sophie has recorded and self produced a mini-album, as well as having been featured across various radio stations and podcasts including BBC Bristol & Somerset.
With a soothing delicate vocal tone accompanied with a prolific rich blend of acoustic guitar, Sophie’s folk pop hooks will match any mood.
Currently working on her follow up EP, big things are yet to come.
Listen one of Sophie’s fantastic songs from Youtube below. 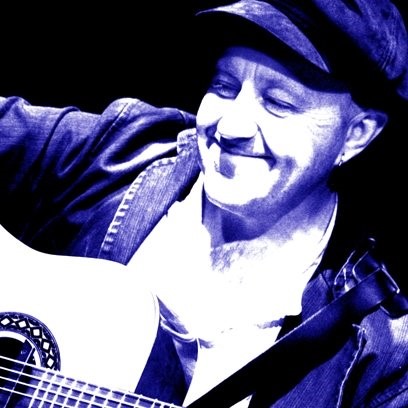 Ged has been a singer-songwriter for far too many years for his own good! He’s played from pubs and clubs to the Royal Festival Hall. He’s managed to do a few gigs in other countries without being deported (so far).
His preferred instrument of choice has yet to be invented so, until that day, he makes a valiant effort at forcing tunes out of the guitar and ukulele – not at the same time.
He has supported well-known artists when they have been desperate for a support act and headlined gigs where the organisers were even more desperate!
Ged has not played a solo gig for many years, having instead preferred to hide in a band called ‘The Jumping Doakies’ for many years. He only agreed, reluctantly, to play this gig as the organisers have promised him free beer for life.
CICCIC now has the pleasure of Ged’s quality performance in music as a solo artist and with a variety of genres and songs the audience will have the pleasure of hearing this well-seasoned musician at work.

Peter is a musician from Taunton, and loves to make music! He started playing guitar when he was about 10, and have received lessons on and off since then, learning how to play both electric and acoustic. Peter started singing a couple of years back, and have since done several recordings and videos, though he has no formal training. Peter can also play a wee bit of Ukulele, Bass, and Piano! He plays mostly original material, with a few covers thrown in for good measure. Peter also, Films, Records, and Masters all his own tracks with main influences that include City and Colour, U2, Bob Dylan and the Foo Fighters.
You have to love Peter’s voice and song writing when you here the video below.